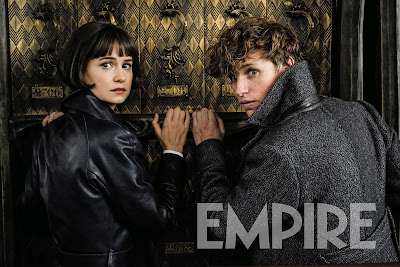 'FANTASTIC BEASTS 2'
NEW PHOTOS WITH JUDE LAW AND EDDIE REDMAYNE!
Photo treats for you in the last weekend of 2017! New photos have been released from FANTASTIC BEASTS 2: THE CRIMES OF GRINDELWALD featuring lead star Eddie Redmayne and also Jude
Law. The movie which is out next November continues the story after the powerful dark wizard Gellert Grindelwald was captured by Newt Scamander (Eddie Redmayne). But, making good on his threat, Grindelwald escaped
custody and has set about gathering followers, most unsuspecting of his true agenda: to raise pure-blood wizards up to rule over all non magical beings. In
an effort to thwart Grindelwald’s plans, Albus Dumbledore (Jude Law) enlists his former student Newt Scamander, who agrees to help, unaware of the dangers that lie ahead. Lines are drawn as love and loyalty are tested, even
among the truest friends and family, in an increasingly divided wizarding world. Hopefully this one ain't as ghastly bad and boring as the first one!


'MARY POPPINS RETURNS'
& GOES ON A MAGICAL JOYRIDE
Disney has, meanwhile, revealed a new photo from their family adventure MARY POPPINS RETURNS showing Emily Blunt on a fun ride with all the kids and Jack the Lamplighter! Out next December and also starring
Emily Mortimer, Julie Walters, Meryl Streep, Colin Firth and Angela Lansbury, it sees Ben Whishaw as the older Michael Banks who needs help of his old nanny with his own children!


1ST 'BUMBLEBEE' PHOTO
FROM TRANSFORMERS SPINOFF!
Transformers spin off movie also has its 1st photo unleashed revealing Hailee Steinfeld in BUMBLEBEE which is set in 1987, with the titular yellow robot seeking refuge in a California junkyard, where he encounters
young Charlie (Hailee Steinfeld). Together, Charlie will help nurse the injured, runaway Transformer back to health, and he will help her find her place in the world. It is also out December next year.
Posted by DEZMOND at 1:30 PM