'THE ROYALS' SEASON 4
KISS MY ARISTOCRACY!
Amid the recent scandal with its show runner, who's just got fired, E!'s leading scripted show THE ROYALS has announced the beginning of its
long awaited new season for March 11th, which is a bit later than usual. All the leading stars will return for the fourth season led by Eliza- beth Hurley as cunning queen Helena, William Moseley as Prince Liam and Max Brown as the newly crowned King Robert, Tom Austen as their super hunky bodyguard Jasper and Alexandra Park as bratty princess Eleanor, with Jake Maskall as their uncle Cyrus who was the biggest loser of the
previous season losing both the crown and his balls. He will now form an unlikely alliance with his nephew Liam. As you remember the previous season saw the return of the missing prince Robert who took over the throne from
prince Liam, after literally kicking his royal ass, and then revealed those who supported him shouldn't expect sweet treatment from him either which 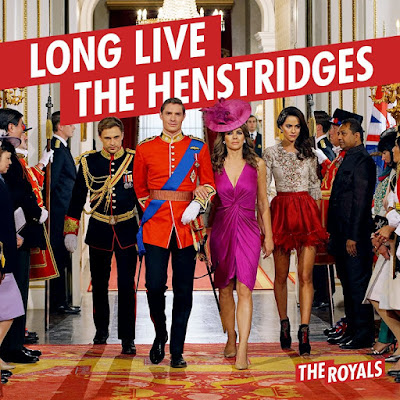 includes his unsuspecting mother the queen. As you can see in the first teaser below, she won't give up without fight! Are you excited to see the new schemes and plots at the royal court?