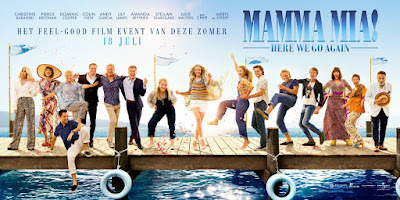 'MAMA MIA HERE WE GO AGAIN'
MERYL STREEP IS DEAD IN THE FIRST SEQUEL TRAILER
Continuing the prefestive week of exclusive new trailers for next year's films, today you can enjoy MAMMA MIA HERE WE GO AGAIN trailer. Arriving exactly ten years after the first movie it will sail into cinemas next July!


CHER AND ABBA!
After Amanda Seyfried's character Sophie (who is now pregnant and realises she needs to take risks like her mother did) got married on a Greek island to the sounds of Abba in the first movie also discovering that her mother Donna (Meryl Streep) does not know who Sophie's father is (Colin Firth, Pierce Brosnan and Stellan Skarsgard return as the three possible candidates),
the sequel now, since Donna has apparently died after the wedding, focuses on Donna's youth with Lily James, Jessica Keenan Wynn and Alexa Davies playing the young Donna and her group the Dynamos who were played by Christine Baranski and Julie Walters in the original film.
Dominic Cooper returns as Sophie's husband Sky,  while Jeremy Irvine, Josh Dylan and Hugh Skinner play younger versions of her possible dads. Cher also appears as grandmother in the movie which was shot last summer in Croatia!