Now admit it - we all knew this was bound to happen: Angelina Jolie is planning to take the Egyptian throne. It appears that producer Scott Rudin has bought the rights on the new Cleopatra biography, "Cleopatra: A Life" by Stacy Schiff, and he wants to adapt it into an epic with Angelina. And as far as I got it from the news and rumors the whole project is focused exclusively on miss Jolie as the lead star. 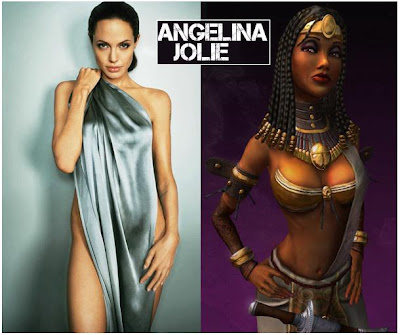 As you already know, the most famous Cleopatra on the big screen was Elizabeth Taylor who starred in the 1963 "Cleopatra", the biggest box-office flop in history, while Angelina Jolie already proved that she can get all imperial and royal as queen Olympia in "Alexander", another huge flop. At the beginning of this decade there were even some plans for Angelina to portray the famous Russian queen Catherine the Great, who was also portrayed by stunning Catherine Zeta Jones in the popular mini series on the Russian ruler back in the 90's.
Posted by DEZMOND at 8:38 PM