EMILY WATSON TO LEAD
DUNE: SISTERHOOD TV SERIES
Just when we thought this project was dead as dodo, Variety reports that Emily Watson has been cast in DUNE: SISTERHOOD series at HBO Max, which, based on Frank Herbert novels, will follow the Bene Gesserit, a mysterious order of women. Watson will play Valya Harkonnen, while Shirley Henderson will be Tula Harkonnen, two sisters who have risen to power in the Sisterhood, a secret organization of women who will go on to become the Bene Gesserit. Sadly, Denis Villeneuve, who atrociously helmed the lifeless and dull borefest of the recent Dune movie is executive producing this one too.
RETURN OF FRASIER
OFFICIAL AT PARAMOUNT PLUS
Paramount Plus has officially ordered a ten episode return of classic multicam sitcom FRASIER with Kelsey Grammer as psychiatrist and radio host Frasier Crane. After starting in Boston within Cheers and moving to 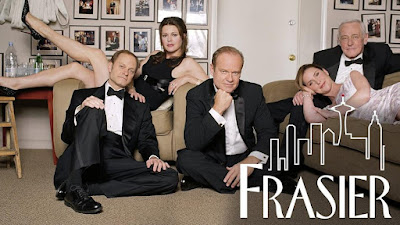 Seattle in Frasier, he will now move to a new city and will be surrounded by new characters, with original Frasier cast members not appearing as series regulars but making guest appearances. The show won 37 Emmys in 11 seasons.
THE WONDER TRAILER
SENDS FLORENCE PUGH TO EIRE
Speaking of things lifeless and overrated, check out Florence Pugh in the first trailer for THE WONDER period set thriller movie which will stream on Netflix November 6th. Ciaran Hinds, Tom Burke, Toby Jones also star in the film set in 1862 just after the Great Famine, with Pugh playing English Nightingale Nurse Lib Wright, who is called to a devout community in the Irish Midlands to examine 11-year-old Anna (Kíla Lord Cassidy), who claims to have not eaten for four months, surviving on “manna from heaven.” Lib is determined to find out what’s really going on as Anna’s health deteriorates. Check out the trailer below:
Posted by DEZMOND at 7:30 PM