PATHE AND DISNEY PLUS
PREPARING MILADY ORIGINS AND BLACK MUSKETEER SHOWS
While we are waiting for the next spring to bring us the first part of the planned duology THE THREE MUSKETEERS: D'ARTAGNAN and then THE THREE MUSKETEERS: MILADY in December next year, Pathe has teamed up with Disney Plus in making two spin off TV series MILADY: ORIGINS which will follow the beginnings of the elegant vilainess and BLACK MUSKETEER which I announced a few years ago. As Variety reports, both  “Milady Origins” and “Black Musketeer,” which will shoot in French, will build on the experience gathered making the $80 million worth historical adventure movie saga based on Alexandre Dumas' work. Judith Havas and Simon Jablonka are co-creating “Milady Origins” while Thomas Mansuy and Mathieu Leblanc are co-creating “Black Musketeer”!
3 MUSKETEERS: D'ARTAGNAN
will, meanwhile, follow D'Artagnan (Francois Civil), a spirited young Gascon, who is left for dead after trying to save a young woman from being kidnapped. When he arrives in Paris, he tries by all means to find his attackers. He is unaware that his quest will lead him to the heart of a real war where the future of France is at stake. Allied with Athos (Vincent Cassel), Porthos (Pio Marmai), and Aramis (Romain Duris), three musketeers of the King (Louis Garrel) with a dangerous temerity, D'Artagnan faces the dark machinations of the Cardinal of Richelieu (Eric Ruf). But it is when he falls madly in love with Constance Bonacieux (Lyna Khoudri), the Queen's (Vicki Krieps) confidante, that d'Artagnan truly puts himself in danger. For 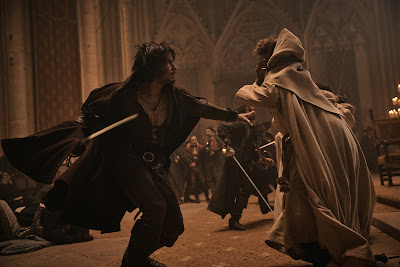 it is this passion that leads him into the wake of the one who becomes his mortal enemy: Milady de Winter (Eva Green).
Posted by DEZMOND at 7:30 PM