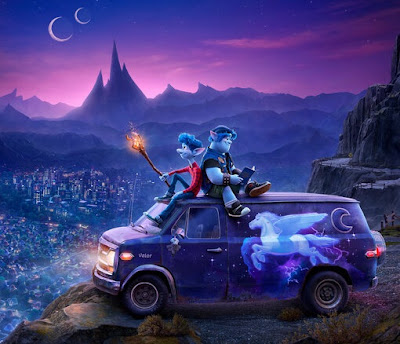 'ONWARD' ANIMATED COMEDY
MEET THE TEENAGE ELVES!
Two teenage elf brothers, Ian and Barley Lightfoot, who embark on an extraordinary magical journey to resurrect their father, that is who Chris Pratt and Tom Holland are playing in Pixar's new animated comedy adventure ONWARD which will fly into cinemas next spring, March 6th. Director Dan Scanlon (Monsters University) has based the story on his personal childhood and the loss of his father when he and his brother were very little. The film itself is set in an imaginary 70s in a world without humans, populated by elves, trolls and sprites. Check out the colourful character posters and hilarious trailer below
and tell us what you think!


The Story Of Animated Adventure Onward
Set in a suburban fantasy world, two teenage elf brothers, Ian and Barley Lightfoot, go on an journey to discover if there is still a little magic left out there in order to spend one last day with their father, who died when they were too young to remember him.


Who Else Is In The Film?
Beside the two of them, the voice cast also includes other stars whose characters you can see in today's character posters: Octavia Spencer as the
voice of the Manticore (Ian and Barley seek an ancient map from the Manticore, once a fearless warrior whose tavern served as a waystation for
travellers embarking on epic quests. Part lion, part bat and part scorpion, the Manticore has adapted to changing times, but her adventurous spirit still lurks
within), Julia Louis Dreyfus as Ian and Barley's mom, Laurel Lightfoot, Mel Rodriguez lends his voice to  Officer Colt Bronco; Lena Waithe lends her voice to Officer Specter, while Ali Wong is the voice of Officer Gore.