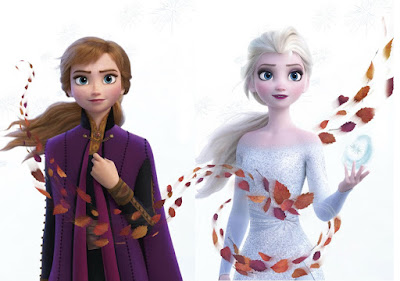 DISNEY'S 'FROZEN 2'
ARRIVES TO CINEMAS NEXT WEEK
It does not really happen often that a Disney animated classic gets a sequel, none of their iconic animated films got a second part, but since Frozen
took almost $1,3 billion in cinemas and became the highest grossing animated movie ever and is in top 20 highest grossing films of all times, they had to milk it a bit more and thus FROZEN 2 is ready to conquer theatres next week from November 22nd. First predictions say that the film will be a gargantuan hit with possible $125 million earnings in the opening weekend. It already broke all records with the presale of the tickets. The Thanksgiving weekend after that will probably help it break records in its second week in cinemas as well especially with the sequel having an Autumny feel rather than the wintery one of the first movie.


The Story Of Frozen 2
is set three years after the events of the first film. Queen Elsa starts to hear a strange sound from the north calling her. Together with her sister Anna,
Kristoff, Olaf, and Sven, they embark on a new journey beyond their homeland of Arendelle in order to discover the origin of Elsa's magical powers and save their kingdom


Who Is In The Magical Kingdom?
The voice cast is again led by Idina Menzel as Elsa, the Queen of Arendelle, and Anna's sister, who has the power to manipulate and create ice. Kristen Bell is Anna, a Princess of Arendelle and Elsa's younger sister while
Jonathan Groff is Kristoff, an iceman who is Anna's boyfriend and has a pet reindeer named Sven! Josh Gad returns as Olaf, a lovable snowman created by Elsa's magic. Sterling K. Brown is Lieutenant Destin Mattias, the leader of a
group of soldiers who were trapped in the enchanted forest for years. Evan Rachel Wood is Queen Iduna, the mother of Elsa and Anna, while Alfred Molina is King Agnarr, the father of Elsa and Anna. Martha Plimpton is
Yelana, the leader of the Northuldra tribe. Jason Ritter is Ryder, a member of the Northuldra, Honeymaren's brother who shares Kristoff's love for
reindeer. Rachel Matthews is Honeymaren, a member of the Northuldra,  who wants to bring peace to the enchanted forest. Jeremy Sisto is King Runeard while Ciarán Hinds is Grand Pabbie, the leader of the Trolls.