'MISS SCARLET AND THE DUKE'
NEW PERIOD SET SERIES PHOTOS AND TRAILER ARE HERE
After yesterday's North Water, another new period set series has new photos released! A+E Network's MISS SCARLET AND THE DUKE 19th century drama has new pictures from the sets featuring lead stars Stuart
Martin and Kate Philips as 19th century London's first female private detective! The six episode series will also star Ansu Kabia, Andrew Gower, Matthew Malone, Simon Ludders. You can also check out the first trailer
featuring a scene in which she hits a policeman in a disgusting example of violence against men which is, I'm guessing, supposed to be funny. It is not. It is a despicable and vile example of hypocrisy and double standards. 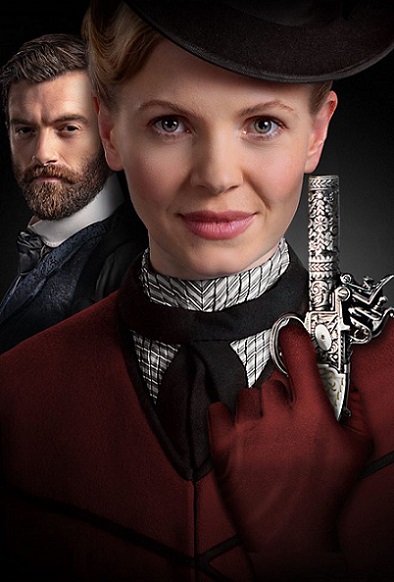 London's First Female Detective
When Eliza’s (Kate Philips) father dies, he leaves her penniless in a time where marriage is her only option for financial security. But the headstrong Eliza is determined to find another way. Luckily, she has an ace up
her bonnet – her father’s business – a private detective agency. Eliza knows all the tricks of the trade but as a genteel 19th century lady she’s never been allowed to put them into practice. To operate in this man’s world, she needs a
partner. Step forward Detective Inspector William Wellington (Stuart Martin) of Scotland Yard, who is also known as “The Duke;” drinker, gambler
and womaniser. Eliza and The Duke strike up a mismatched, fiery relationship that will crackle and smoulder with sexual tension as they team up to solve crime in the murkiest depths of 1880’s London.
Posted by DEZMOND at 1:30 PM