'BELGRAVIA' ITV SERIES
REVEALS FIRST TRAILER!
This one will not air before 2020, but ITV has decided to tease us with the first trailer for their new period set drama BELGRAVIA based on the novel
by Julian Fellowes who is also producing the series himself. The brand new six-part series from Carnival Films will also air on EPIX in 2020, telling an
intriguing tale of London society in the 19th Century. The cast includes Tamsin Greig, Philip Glenister, Harriet Walter, Tom Wilkinson, Alice Eve. It is expected it will air in UK before Easter and on Epix in USA from April 12th. 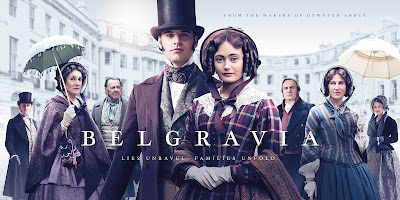 19th Century London
Belgravia is a story of secrets and dishonour amongst the upper echelon of London society in the 19th Century. When the Trenchards accept
an invitation to the now legendary ball hosted by the Duchess of Richmond on the fateful eve of the Battle of Waterloo, it sets in motion a series of events that
will have consequences for decades to come as secrets unravel behind the porticoed doors of London’s grandest postcode. Check out the trailer below:


NEW 'CURSED' PHOTO
REVEALS DANIEL SHARMAN
Speaking of period set series, check out the first look at Daniel Sharman as the Weeping Monk in Netflix epic series CURSED which will air next year with Katherine Langford playing young sorceress Nimue who encounters a young King Arthur (Devon Terrell) on his quest to find a powerful and ancient sword. You can check more photos from the series here.
Posted by DEZMOND at 1:30 PM