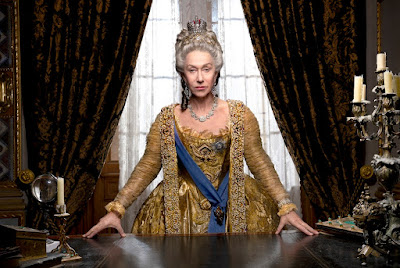 'CATHERINE THE GREAT'
ALL BOW, THE EMPRESS IS HERE!
From yesterday's visit to the exotic queen of Jhansi, we are moving today to Matushka Rosiya and the lavish imperial court of CATHERINE THE GREAT, epic new historical mini series starring Helen Mirren as Russia's most famous tzarina who made her country bigger than it ever was before and turned her palace into Europe's centre of glamour and glitz and also scandal! The four episode saga is ready to start October 3rd at Sky Atlantic in UK, Italy, Germany, Spain and Austria, and then on October 21st over at HBO in USA and Canada (I'm not fully sure, but I'm guessing it will also air on HBO's cable channels around the world, so
you might catch it there if you are not from the mentioned territories). Unlike most other series which usually dealt with her arrival on the throne after
throwing down her husband (which is the case with another one that is currently in production The Great with Elle Fanning and Nicholas Hoult)
this one will depict Catherine's older years when she spent her time chasing hot young hunks and enjoying her relationship with Count Potemkin.
Born in 1729 she became Empress of Russia in 1762, and reigned until her death in 1796 which makes her the country’s longest ruling female leader.
During her reign she managed to turn Russia into a power that became a top player in Europe instead of being ignored by the rest of the continent, she
spread the territory of the empire and made the number of its citizens almost ten times bigger, and although she tried to modernize certain systems in the
country, she also made the number of enslaved pheasants bigger than ever before as she was very prone to gifting her lovers and friends with estates and whole villages and towns to rule.


Catherine The Great
delves into the politically tumultuous and sexually charged court of the most powerful female monarch in history. Catherine wielded supreme power
throughout Russia for nearly half of the 18th century – strong-minded, independent, brilliantly intelligent and sexually liberated, she was the
definition of the modern woman. The story follows Catherine towards the end of her reign and her passionate affair with Grigory Potemkin. Amid scandal,
intrigue and immense conflict, this is a story of obsessive love. Unable to publicly marry and famously promiscuous, they develop a unique and devoted relationship, overcoming their adversaries and together shaping Russia as we know it today.


Who Are The Imperial Courtiers?
Beside Joseph Quinn as her son Grand Prince Paul, Jason Clarke as her lover Prince Grigory Potemkin, Antonia Clarke as Paul's wife Princess Sophia and Adam El Hagar as general Valerian Zubov who had an affair
with the much older empress, the cast will also have Rory Kinnear as Panin, a skilful politician, advisor and governor to Catherine’s son, Richard
Roxburgh as Prince Grigory Orlov, her most famous lover who helped her come to power by overthrowing her husband, Kevin McNally as his brother
Alexei Orlov, Bodyguard's Gina McKee as her confidant and lifelong friend Countess Bruce, Clive Russell as The Fool, Paul Kaye as infamous
Pugachev, Sam Palladio as Catherine's young lover Alexander Vasilichikov, and Paul Ritter as general Suvorov! Thomas Doherty will be Peter
Zavadovsky; Raphael Acloque is Platon Zubov, James Northcoate is Alexander Bezborodko and Andrew Rothney is Alexander Dmitriev Mamonov.