'OPHELIA' TRAILER SENDS
DAISY RIDLEY INTO 14TH CENTURY
Even though it premiered back at the very beginning of 2018 at Sundance Film Festival, OPHELIA period set drama is finally getting a theatre release this summer, opening in Northern American cinemas June 28th! The reimagining of Shakespeare's famous tragedy Hamlet, has the story told from Ophelia's perspective! The movie, set in the 14th century but spoken in modern language, is based on the award winning book by Lisa Klein and is
also directed by a woman - Claire McCarthy who is currently directing BBC epic series The Luminaries, an adventure mystery set in the midst of New Zealand's 1860's gold rush! 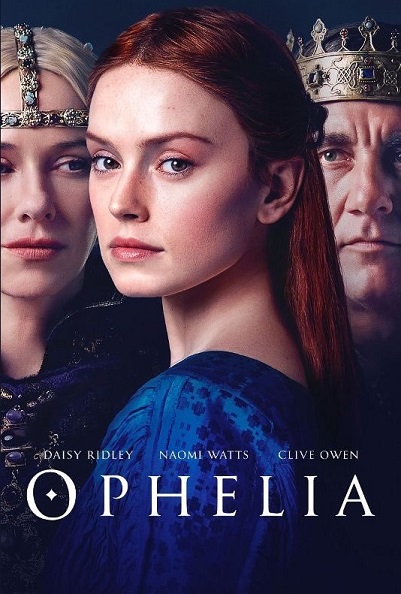 THE STORY OF OPHELIA
Daisy Ridley appears in the movie as the titular character. She plays the most trusted lady-in-waiting to the Queen Gertrude of Danmark (played by
Naomi Watts) who took her into Elsinore Castle as a rebellious and motherless child! Soon enough, Ophelia captures the attention of the young
Prince Hamlet (played by George MacKay) and a forbidden love blossoms and passionate romance kindles between the two in secret! As the kingdom is
on the brink of war amidst its own political intrigue, lust and betrayal begin to tear Elsinore Castle apart from within in this reimagining of the famed
Hamlet. When Hamlet’s father is murdered and the prince’s wits begin to unravel into an insatiable quest for vengeance, Ophelia sharply navigates the
rules of power in Denmark all while struggling to choose between her true love and her own life. The movie, which premiered at Sundance Film Festival also stars Clive Owen as Claudius and Tom Felton as Laertes with Nathaniel Parker as the king!