DRAGON RIDER TRAILER
A SKY ANIMATED ADVENTURE
Well, what better way to end a year then with something delightful even if the year wasn't that at all. After charming us this Christmas with wonderfully lovely Roald and Beatrix, Sky is giving us DRAGON RIDER animated adventure this Valentines. In his directorial debut, arriving to Sky Cinema February 12th, Tomer Eshed brings to life Jonny Smith’s (Sherlock Gnomes, Gnomeo & Juliet) screenplay and from the filmmakers behind The Never Ending Story and the Fantastic Four film franchise. Dragon Rider boasts a star studded cast of voices from Felicity Jones, Thomas Brodie Sangster, Patrick Stewart and Freddie Highmore. 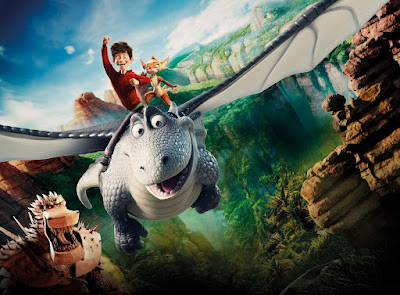 Sky Original Dragon Rider
tells the story of Firedrake (Thomas Brodie Sangster), who wants to show the older generation he is a real dragon, not the naïve fledgling they see him as. When he discovers that humans are about to destroy the forest where the dragons reside, he sets off on a daring crusade with his best friend Sorrel (Felicity Jones) in search for a mythical safe haven hidden in the Himalayas where dragons can live in peace. On their quest, they encounter Ben (Freddie Highmore), an orphan, who they mistake for a dragon rider destined to help them on their voyage. The unlikely trio must learn to work together, despite their differences, as dragon-eating villain Nettlebrand (Patrick Stewart) is hot on their tails to fulfil his own quest: to track and destroy every dragon.
Posted by DEZMOND at 1:00 PM