DARA OF JASENOVAC
CHILLING TRAILER RELEASED!
Out of the ashes of hate comes the untold story of the indomitable human spirit. The first trailer for the shocking and deeply moving film DARA OF JASENOVAC, 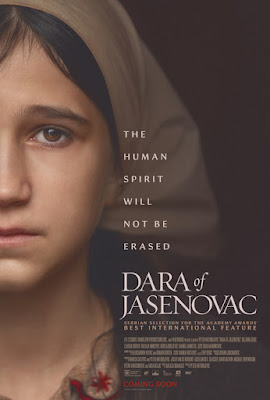 which will represent Serbia in the best foreign movie race at this year's Oscars and Golden Globes, is finally here. The film tells story of little Serbian girl Dara (Biljana Cekic) who comes face to face with the horrors of the Holocaust era after she, her mother and siblings are sent to the concentration camp complex known as Jasenovac. Considered one of the most overlooked parts of history, Jasenovac is run by the Croat fascist Ustase who brutally murdered Jews, Serb and Roma people, which included dozens of thousands of children, close to 100,000 victims in total (although many believe the number could be as high as one million). As unspeakable atrocities start to unfold, Dara must summon tremendous courage to protect her infant brother from a terrible fate while she safeguards her own survival and plots a precarious path towards freedom. Read more about the film here.