IVAN THE TERRIBLE
NEW RUSSIAN EPIC TV SERIES
Beside all the new period set series coming from sweet mother Russia throughout this year that your trusted spy has announced in world's most extensive spotlight on 2021 epic and period set television series, there are some that have already aired this winter. IVAN THE TERRIBLE (Grozny) is among them, it aired this November and December on Russia's national broadcaster in eight hourlong episodes, as a sort of a follow up to the previous successful series from director Alexei Andrianov, Sofia and Godunov, this time with the story of a ruler who experienced great victories and great defeats. The main role is played by two actors: Alexander Yatsenko as young Ivan, and Sergei Makovetsky as the older tzar. The series also stars Tatyana Lyalina (as princess Anastasiya Ivan's first wife), Artur Ivanov, Anton Feoktistov, controversial 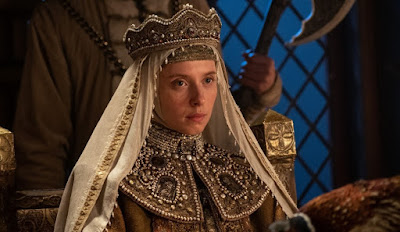 Serbian actress Milena Radulovich (whose involvement in the cast gives the whole project an international vibe), Lyudmila Polyakova, Artyom Tkachenko (as Ivan's brother Prince Vladimir), Maria Paley (as Vladimir's wife Princess Evdokiya) and others. Thousands of costumes, hundreds of actors and half a thousand sets have been used in the production of this lavish historical saga.
IVAN THE TERRIBLE follows the legendary tzar, born to rule, who grew up an orphan, enduring oppression and humiliation from his fellow boyars. The Tsar, striving to establish a single and indestructible power in Russia, was repeatedly betrayed by his closest associates, and having gained great love, he lost it in the darkness of conspiracies and intrigues. This is the story of a ruler who experienced great victories and great defeats.
THE STORY OF THE SERIES
1571. Moscow is devastated after the brutal raid of the Crimean Khan Devlet Girey. Sovereign Ivan the Terrible, deciding that his kingdom has come to an end, begins to write a chronicle of his life. He recalls his early orphanhood, humiliation suffered from his guardians, friends who became enemies, and enemies to whom he was merciless. He cannot escape the memories of his wife Anastasia, the marriage to whom was the happiest period of his life, love that illuminated the first years of his reign ... Young Ivan IV is surrounded by loyal people and wise advisers. He conquered Kazan, created a new army, established  new laws, and an heir was born to him. But soon the bright reign comes to an end: the heir dies, followed by his beloved wife, and the former loyal advisers, one after another, turn into traitors. Ivan IV is gradually being reborn into the infamous Ivan the Terrible - a cruel tyrant. And now rumors about his ruthlessness and violent disposition are becoming true, and these changes in the character of the emperor are changing history. Enemies are approaching Russia - will the country be able to withstand? Check out the darkly atmospheric teaser trailer below and tell us what you think:
Posted by DEZMOND at 1:00 PM