DISNEY REVEALS POSTER FOR RAYA AND THE LAST DRAGON ANIMATED EPIC ADVENTURE AND POSTPONES THE FILM FOR NEXT SPRING! 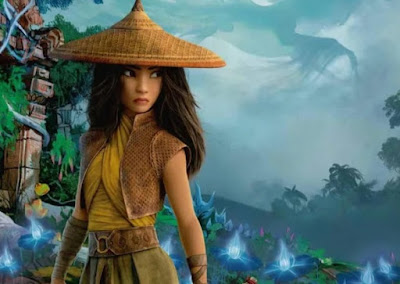 RAYA AND THE LAST DRAGON
UNVEILED IN THE FIRST POSTER
About a year ago Disney showed us the first concept art for their new animated adventure RAYA AND THE LAST DRAGON and now we have
the first poster which shows the lead heroine a bit better, but with that also comes the news that the film has been postponed for March 12th, 2021 instead of being out this November.


RAYA AND THE LAST DRAGON
will take place in the fictional Kumandra, a reimagined earth inhabited by an ancient civilization that venerated the mythical dragons for their power and their wisdom. Kumandra’s five distinct clans form the Land of the Dragon, but dragons are long gone and Kumandra has since been invaded
by a dark, sinister force. Raya is the hero, a lone warrior on a quest to save her world, determined to find the last dragon who she believes has the power to save Kumandra.