ALL CREATURES GREAT AND SMALL FAMILY TV SERIES TO AIR ON CHANNEL 5 THIS AUTUMN AFTER ALL! FIRST PHOTO WITH DIANA RIGG! 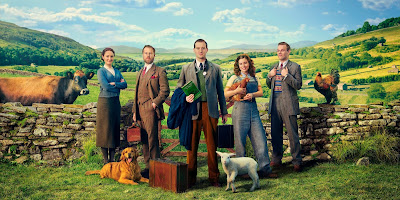 ALL CREATURES BIG & SMALL
TO ARRIVE THIS FALL AFTER ALL
Well, here is at least one thing to look forward to this Autumn: although they said it would be left for next year, now it seems that the remake of ALL CREATURES GREAT AND SMALL will come to Channel 5 this Autumn
after all (which is logical given that  they've shot a Christmas episode too). The latest update is first photo of Diana Rigg as Mrs Pumphrey! The series will
air on PBS Masterpiece in USA. There are talks that the second season has already been ordered.


All Creatures Great And Small
based on James Herriot’s cherished collection of stories, chronicles the heartwarming and humorous adventures of a young country vet. This new adaptation will preserve the rich spirit, tone and values of Herriot’s iconic characters and stories and will bring to life his sharply observed, entertaining and incredibly funny tales of country life in the North of England for a modern audience, introducing a new generation to his life-affirming stories.


Who Is Playing The Big Creatures?
With Nicholas Ralph taking the lead role of James Herriot, the cast also includes Samuel West as Siegfried Farnon, the wonderfully eccentric veterinary surgeon and proprietor of Skeldale House who reluctantly hires the
recently qualified Herriot into his rural practice; Anna Madeley as Mrs Hall, the resident housekeeper and matriarch of Skeldale House; Callum Woodhouse as Tristan, Siegfried’s errant and charismatic younger brother;
and Rachel Shenton as Helen Alderson, an independent local farmer’s daughter who helps her father manage the family farm and care for her younger sister. Diana Rigg is Mrs. Pumphrey, the delightfully eccentric
owner of the overly indulged Pekingese Tricki-Woo; Matthew Lewis is Hugh Hulton, a wealthy landowner and rival to James for Helen’s affections; and Nigel Havers is General Ransom, the fastidious manager of the local racecourse.