HENRY CAVILL, SAM CLAFLIN AND HELENA BONHAM CARTER REVEALED IN THE FIRST TEASER FOR ENOLA HOLMES! PLUS THE STREAMING DATE

FIRST TEASER FOR
HENRY CAVILL'S ENOLA HOLMES
Netflix has released first teaser with Millie Bobby Brown as ENOLA HOMLES alongside her big brothers Sherlock and Mycroft Holmes, played by Henry Cavill and Sam Claflin, in a film which follows Sherlock Holmes'
younger sister Enola who, when her mother disappears, decides to become a super-sleuth in her own right. Running away to London where she establishes
a clandestine private detective career specializing in missing persons investigations, Enola must also keep ahead of her brothers who are determined to capture and force her to conform to their expectations. 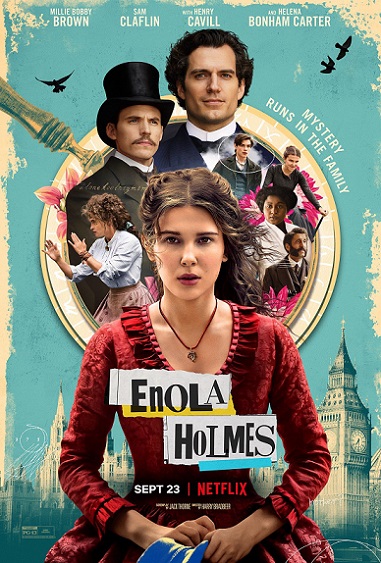 September Airing Date on Netflix
Helena Bonham Carter also stars as Eudoria Holmes, Enola's, Sherlock's, and Mycroft's mother. The film will stream on Netflix from September 23rd!
As you've probably heard the estate of Arthur Conan Doyle is suing the production because they've changed the essence of Holmes turning him into a kind man instead of a brash and arrogant detective that he always was.