'DAS BOOT' SEASON 2
READY TO AIR THIS SPRING!
Back in 2018 your trusted spy was among the first ones to inform you about Sky's award winning DAS BOOT World War II series which proved to be a big success for the production company airing on Sky's channels around Europe and Hulu in USA. Now the series is back with the second season which is airing right now on Sky Germany and will air this month on cable channels around Europe too and Sky's channels in Austria, Italy, UK and Ireland. Beside Tom Wlaschiha, Vicky Krieps, Rick Okon, Vincent Kartheiser, the eight episode second season will also have Thomas
Kretschmann as the new addition to the cast! Speaking of epic, stay tuned this weekend for Hollywood Spy's Wildly Extensive List of Period Set Shows we can expect in 2020 albeit corona lockdown. 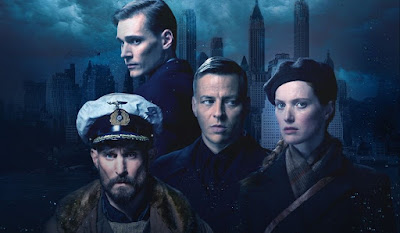 The 2nd Season Of Das Boot
is set in December 1942. We meet the very experienced U-boat ace Johannes von Reinhartz (Clemens Schick) who is sent with U-822 on a secret mission
to the US East Coast in order to disembark three saboteurs. His loyalty is questioned and U-612, with its Commanding Officer Wrangel (Stefan
Konarske), is sent in pursuit. Former U-612 Commanding Officer Hoffmann (Rick Okon) narrowly escaped death in the Atlantic Ocean. In New York he finds shelter with Sam Greenwood (Vincent Kartheiser), who owes his life
to Hoffmann, and meets the sleazy German-born lawyer Berger (Thomas Kretschmann). Will he enable him to return to Germany? Back in La Rochelle, Simone (Vicky Krieps) is still secretly helping those affected by the
Nazi occupation, and Forster (Tom Wlaschiha), Head of the Gestapo, suspects as much, as Simone and her roommate Margot (Fleur Geffrier) work to secure an escape route for a Jewish family.