'CALL YOUR MOTHER' SITCOM
GETS SERIES ORDER AT ABC
Even though it hasn't shot a pilot before the corona lockdown, just based on the scripts, ABC's multicam sitcom CALL YOUR MOTHER  (aka My Village) has become the second sitcom to be ordered for next season after B Positive. It follows an empty-nester mom (Kyra Sedgwick) who wonders how she ended up alone while her children live their best lives thousands of miles away. She decides
her place is with her family and as she reinserts herself into their lives, her kids realize they might actually need her more than they thought. Rachel Sennott, Joey Bragg, Patrick Brammall, Emma Caymares and Austin Crute will also star.


'ANGEL OF DARKNESS'
ALIENIST SEASON 2 TRAILER!
In a bit darker genre, a  trailer has been released for the second season of The Alienist period crime drama this time titled ANGEL OF DARKNESS which hits TNT this summer Sunday, July 26th set at the turn of the century! 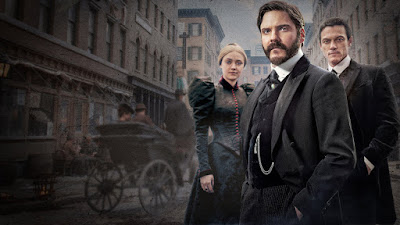 The Alienist: Angel Of Darkness
Based on the Angel of Darkness novel by Caleb Carr, this season follows Sara Howard (Dakota Fanning) who has now opened up her own private
detective agency. Returning are Dr. Laszlo Kreizler (Daniel Brühl), the titular “alienist” who brilliantly and eccentrically psychologically profiles his
criminals, and John Moore (Luke Evans), who now works as a New York Times reporter. The dynamic trio are on the case of a missing baby, the
daughter of the Spanish Consular. Their investigation leads them down a sinister path of murder and deceit, heading towards a dangerous and elusive
killer. As in The Alienist, the series shines a light on the provocative issues of the era – the corruption of institutions, yellow press sensationalism, themes that still resonate today.