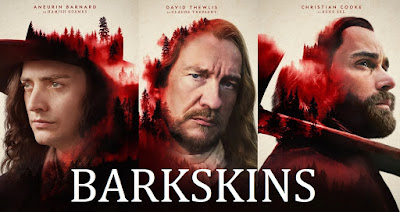 'BARKSKINS' EPIC SERIES
MEET ALL THE CHARACTERS!
It is definitely true, my spylings, that the Autumn small screen landscape will be barren and sad with the corona production lockdowns. There are still a few new epic shows that will try to fill the void (Luminaries and Singapore
Grip will be arriving soon, and they will probably be sold to US  distributors as well as many networks will be looking to fill their Fall schedules with already finished international English language series which is why Cannes Series event taking place next month online will probably have tons of lucrative deals), but that void will be a deep one as many networks will postpone the start of new season till January. One of the new epic series that is coming to us to ease our boredom very soon is BARKSKINS which starts May 25th with two episodes back to back in following four weeks in 172
countries around the world. It will also get a Hulu release the very next day. Starring David Thewlis, Christian Cooke, Aneurin Barnard and Marcia Gay Harden, the series, based on the novel by Pulitzer-winner
Annie Proulx, follows a disparate group of outcasts who must navigate brutal hardships, competing interests, and tangled loyalties at the crossroads of civilization in late 1600s New France.


The Story Of Barkskins Is Set
in Wobik, a small settlement in what is now the Canadian province of Quebec. As the Catholic Church sends Jesuit priests to convert the indigenous people, France sends indentured servants to populate its territory, along with "Filles
Du Roi" ("Daughters of the King"), young women to be matched with husbands, start families and help the colonies prosper. This disparate group of outcasts, rogues and innocents must navigate brutal hardships, competing
interests and tangled loyalties at the crossroads of civilization: 1690s New France.Check out the gritty and gorry trailer below and tell us will it be your summer 2020 small screen watch?