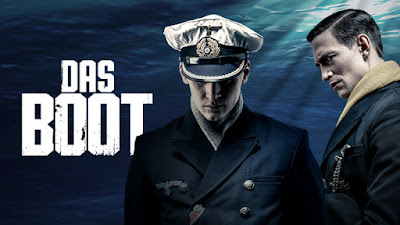 'DAS BOOT' TV SERIES
WHEN BOYS BECAME MEN
Your treat for this Saturday are new photos and the first trailer for World War II German TV series DAS BOOT which will hit Sky One (in Germany, Austria, Switzerland, UK, Ireland, Italy) November 23rd and will later also air on Hulu in Northern America, AMC in Spain and Portugal and Epix and Viasat in Russia, Central and Eastern Europe! The series, which explores the emotional torment of life during World War Two, cost $33 million to make and is inspired by Lothar Günther Buchheim’s best selling novel which was
previously made into an Oscar nominated movie by Wolfgang Petersen! Tom Wlaschiha, Vicky Krieps, Lizzy Caplan, Vincent Kartheiser, James
D’Arcy, Thierry Frémont, August Wittgenstein, Rainer Bock, Rick Okon, Leonard Scheicher, Robert Stadlober, Franz Dinda and Stefan Konarske, are just of the names in the international cast! 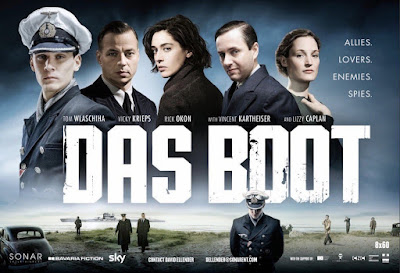 DAS BOOT TV SERIES
starts in the fall of 1942 in occupied France. Nazi submarine U-612 is ready for its maiden voyage, preparing to head into the increasingly brutal warfare with its young crewmen, including the new commander, Klaus Hoffmann
(Rick Okon). As the 40 young men take on their first mission, they struggle with the cramped and claustrophobic conditions of life underwater. Meanwhile, at the port of La Rochelle, the world of Simone Strasser spirals out of control as she is engulfed in a dangerous liaison and forbidden love, torn between her loyalty for Germany and the French Resistance, and causing her to question everything.