'SEE' EPIC FANTASY SERIES
HERA HILMAR, CHRISTIAN CAMARGO JOIN JASON MOMOA
Just epic genre news for you today, spylings! Apple keeps casting stars for their ten part epic fantasy series SEE with the story set in a future when the human race has lost the sense of sight, and society has had to find new ways to interact, to build, to hunt, to survive. All of that is challenged when a set of twins with sight is born. Christian Camargo and Hera Hilmar are the latest ones to join the cast which already includes Jason Momoa (as Baba Voss, a fearless warrior, leader and guardian)! Christian Camargo will be Tamacti Jun, the head of Queen Kane’s (Sylvia Hoeks) army while
Da Vinci's Demons' Hera Hilmar is Maghra, a determined mother. Alfre Woodard will play Paris, an advisor and priestess.


'OUTLAW KING' POSTER
AND CHRIS PINE'S NEKKID WILLY!
And are you excited to see some mediaeval action over at Netflix who are releasing their OUTLAW KING November 9th? The movie will also be released in selected cinemas starring Chris Pine in a true David v Goliath story of how the great 14th Century Scottish OUTLAW KING Robert The Bruce used cunning and bravery to defeat and repel the much larger and better equipped occupying English army. Aaron Taylor Johnson is another Scottish hero James Douglas, Florence Pugh is Robert's wife Elizabeth de Burgh, with James Cosmo, Matt Stokoe, Callan Mulvey, Tony Curran and 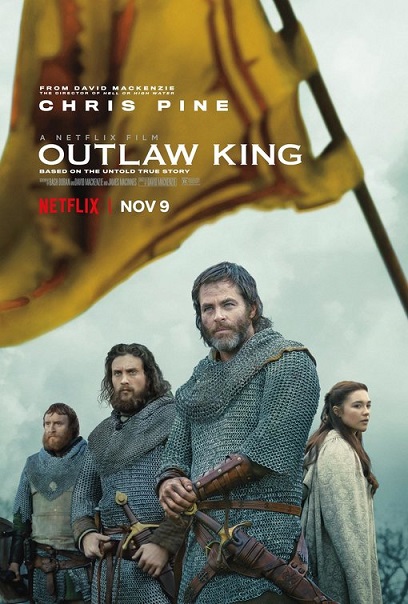 Billy Howle as Prince of Wales also in the cast. Charming info: you will see Chris Pine's rebellious willy in one of the scenes in which the Scottish king is bathing in a cold loch!