NEW 'NUTCRACKER' POSTERS
ARRIVE FROM THE FOUR REALMS!
While we are waiting for Disney to turn its animated tales into live action movies (almost all of the more famous one are in the process of that currently) the fairy tale turned into a big screen adventure that you will first get to see, as soon as next month, is THE NUTCRACKER AND THE FOUR REALMS, adapted by our beloved director Lasse Hallstrom from E.T.A. Hoffman’s classic Christmas Eve tale! It will dance or ballet its way into cinemas starting November 2nd, starring Mackenzie Foy, Helen Mirren as Mother Ginger, Matthew MacFadyen, Morgan Freeman, Miranda Hart as Dew Drop Fairy,
Eugenio Derbez as Flower Realm King, Jack Whitehall as Harlequin and Richard E. Grant as Snow Realm King. You can see some of them on the
enchanting new character posters for the magical fairy tale fantasy. Lasse got a help behind the helm from Joe Johnston who joined the last month of 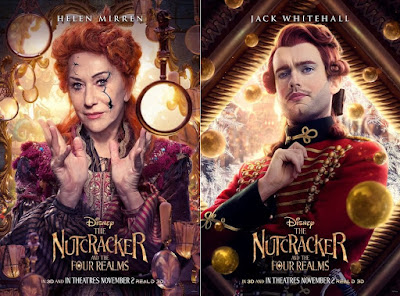 
IN THE NUTCRACKER AND THE FOUR REALMS
all Clara (Mackenzie Foy) wants is a special key that will unlock a box that holds a priceless gift. A golden thread, presented to her at godfather 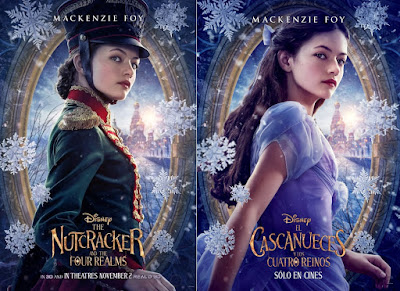 Drosselmeyer's (Morgan Freeman) annual holiday party, leads her to the coveted key, which promptly disappears into a strange and mysterious parallel 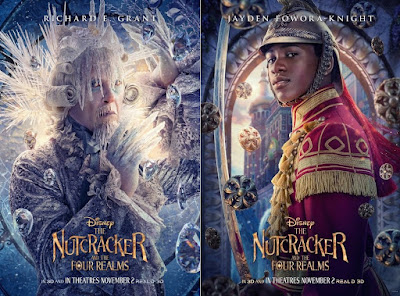 world. There, Clara encounters a soldier named Phillip (Jayden Fowora Knight), a gang of mice and the regents who preside over three Realms: Land of Snowflakes, Land of Flowers and Land of Sweets. Clara and Phillip must 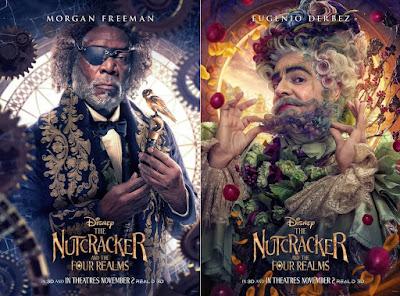 brave the ominous Fourth Realm, home to the tyrant Mother Ginger (Helen Mirren), to retrieve Clara's key and hopefully return harmony to the unstable world. Try to ignore the atrociously miscast Keira Knightley in the trailer below and her criminally, almost tragically bad voice and pathetic facial expressions.