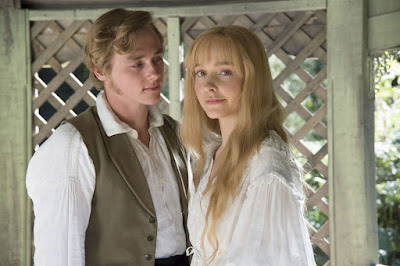 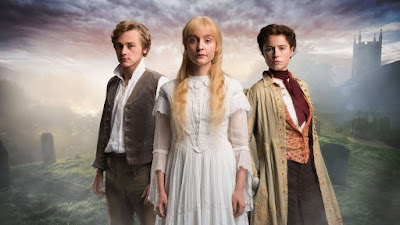 IN THE WOMAN IN WHITE
Walter Hartright (Ben Hardy), a young drawing master, encounters a ghostly woman dressed all in white on Hampstead Heath. He offers her
assistance, but is later shocked to discover she has escaped from a lunatic asylum. The next day, Walter leaves London to take up a teaching post in the
village, working for Mr Frederick Fairlie (Charles Dance), where he learns of a connection between his charming pupils, Laura Fairlie (Olivia Vinall) and
Marian Halcombe (Jessie Buckley), and the mysterious woman in white: she’s known to the household as Anne Catherick, a mentally handicapped
child who grew up in the village. Over the next few months, Walter and Laura Fairlie fall deeply in love, however she is already promised in marriage to a
baronet - Sir Percival Glyde (Dougray Scott). When Laura receives a vicious letter attacking Sir Percival, Walter thinks Anne, who has recently returned to
the village, might be responsible. He confronts her, only to uncover a chilling truth about Laura’s betrothed – that it was he who put Anne in the asylum.


'THE ROTHSCHILDS'
JULIAN FELLOWES PENNING SERIES ON  THE RICHEST FAMILY
Downton Abbey's Julian Fellowes is going to produce a series on the richest family on Earth THE ROTHSCHILDS (they could apparently feed all
the starving people in the world and cure all the ill ones if they weren't evil, as they, allegedly own about 80% of all world's wealth! As 'Deadline' reports, he is writing the 19th century saga set against the backdrop of war and revolution. It tells the story of how the family became to possess the largest private fortune in the world. They gained pre-eminence in the bullion trade during the Napoleonic Wars between 1803 and 1815 and Nathan Mayer Rothschild almost single handedly financed the British war effort. It will also portray a story about human relationships, fraternal struggles for dominance, of brilliant but disenfranchised women, of generational conflict, of incestuous alliances and of forbidden love with outsiders.
Posted by DEZMOND at 1:30 PM