SOFIA VERGARA
TO PRODUCE 'KOATI' ADVENTURE
Animation all the way today, starting with the news from Sofia Vergara who will produce and voice animated movie KOATI directed by Rodrigo Perez Castro who worked on Ferdinand and Ice Age movies. The movie will revolve around three unlikely heroes: a free spirited coati (a raccoon-like animal found mainly in Central and South America), a fearless monarch butterfly, and a hyperactive glass frog as they embark on an adventure to stop a wicked coral snake (Vergara) from destroying their homeland and friends.The coming of age story, filled with kind-hearted spirit and positivity, will present us with Latin American jungles, 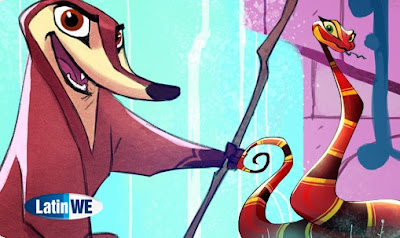 the Amazonian rainforest, and all the fun and cute exotic creatures that call them ‘home’. The movie will try to find distributors at this year's Cannes Film Festival open for foreign sales.

'HERE COMES THE GRUMP'
TURN UR FROWN UPSIDE DOWN
Speaking of Ice Age, the writer of its Meltdown sequel Jim Hecht is penning another crazy new animated adventure HERE COMES THE GRUMP now known as A WIZARD'S TALE which should hit European cinemas this May! The voice cast includes Lily Collins, Ian McShane and Toby Kebbell!
Balloon kingdoms, dopey police dragons and happy wizards are exactly how Terry remembered his Grandmother's whacky fairy tales. Except they are real and it's definitely not as 'cheerful'.


'SMALLFOOT'
GETS A BIG NEW TRAILER!

New trailer and poster have been released for animated adventure directed by Karey Kirkpatrick (he directed Over the Hedge and wrote children's classics Charlotte's Web, Chicken Run, James and the Giant Peach, The Spiderwick Chronicles), SMALLFOOT It has the story revolving around a Yeti called Migo (with the voice from Channing Tatum) who is convinced that the elusive creatures known as "humans" really do exist. Beside Channing Tatum as Migo, the voice cast also includes James Corden as Percy, a human, Common as Stonekeeper, LeBron James as Gwangi, Gina Rodriguez as Kolka, Danny DeVito as Dorgle, who are all yetis!