FIRST 'TOLKIEN' PHOTOS WITH
NICHOLAS HOULT & LILY COLLINS
We are continuing with our updates on period set projects today as well with 1st photos from the sets of TOLKIEN a biopic which will follow the young days of the author of world's favourite epic fantasy saga Lord of the Rings, starring Nicholas Hoult and Lily Collins. 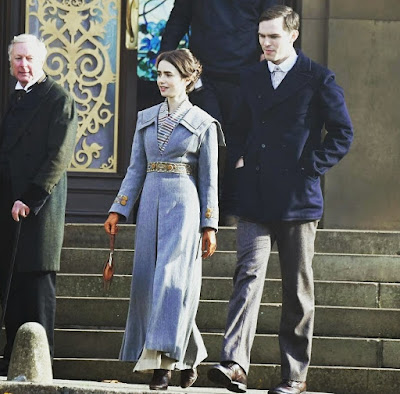 THE FATHER OF THE LORD OF THE RINGS AND HOBBIT
The movie explores the early life of J. R. R. TOLKIEN as he finds love, friendship and artistic inspiration among a group of fellow outcasts. When the horrors of World War I envelope Tolkien's life, they threaten to tear this
"fellowship" apart, and he questions the very meaning and purpose of his art. Instead, he finds a way to use these experiences as inspiration for his famous works, among them The Hobbit and the Lord of the Rings trilogy. Lily Collins is his love and wife Edith Bratt who inspired the elven princesses from his sagas. Derek Jacobi and Anthony Boyle also star!


'MARY SHELLEY' TRAILER
THE MOTHER OF FRANKENSTEIN!
The first trailer has been released after many years of waiting for the first English language movie directed by a female Arabian director, MARY SHELLEY previously known as A Storm in the Stars and I must admit it doesn't look very special. It portrays the famous love affair between poet Percy Shelley (played by Douglas Booth) and 18 year old Mary Wollstonecraft Godwin (played by Elle Fanning with the most horrible British accent we've heard in a long time), which resulted in Mary Shelley writing Frankenstein. Tom Sturridge is Lord Byron, with Ben Hardy, Maisie Williams, Jack Hickey and Joanne
Froggatt also in the cast which includes Hugh O'Connor as Coleridge! The movie is out May 25th in USA and in July in UK and around the world.