'NORMAL PEOPLE'
TO PAIR UP LIAM NEESON AND LESLEY MANVILLE!
Over at Cannes, a project that will try to find a studio is romantic movie NORMAL PEOPLE set to star Lesley Manville and Liam Neeson in lead
roles. As 'Deadline' reports, the movie set to shoot this summer in Ireland, charts the story of a long married couple, Joan and Tom, who have an accumulated ease and deep tenderness to their relationship but when Joan is unexpected- ly diagnosed with breast cancer, the course of her treatment shines a light on their bond and exposes challenges arising from an uncertain future. Meanwhile, we're waiting for Hulu to air us the second season of Lesley's Harlots epic series!


ASIMOV'S 'FOUNDATION'
TO BECOME DAVID S. GOYER PRODUCED SF TV SERIES
I told you last year that a television series is going to be made out of Isaac Asimov's sf classic FOUNDATION and it will be done by David S. Goyer who gave us Da Vinci's Demons and Krypton. And now it has been revealed that Apple is developing it with Skydance Television! The complex saga follows humans scattered on planets throughout the galaxy, all living under the rule of the Galactic Empire. The protagonist is a psycho-historian who has an ability to read the future and foresees the empire’s imminent collapse. He sets out to save the knowledge of mankind from being wiped out. Most of the famous sf films have been heavily influenced by this trilogy.

'OCCUPATION' TRAILER
ALIENS ARE COMING!
Speaking of science fiction, straight from Australia comes new sf action OCCUPATION which should invade cinemas sometime this year. You can check out new posters and trailer for the movie starring Dan Ewing, Temuera Morrison and Charles Terrier.  After their small Australian country town is annihilated by an overwhelming airborne attack, a group of civilians evade capture and discover they are now among the last remaining survivors of an extraterrestrial invasion engulfing the entire planet. As humanity falls under world-wide occupation, they form a home- 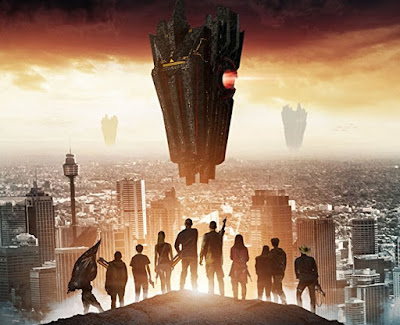 grown army to fight back against vastly superior enemy forces. On the front lines of the battle for Earth, they are our last hope.