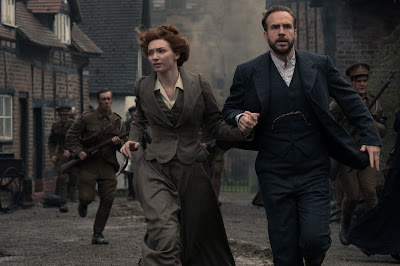 ALIEN INVASION IS HERE!
Set in Edwardian England, the first alien invasion story in literature follows George (Rafe Spall) and his partner Amy (Eleanor Tomlinson) as they attempt to defy society and start a life together. Rupert Graves is Frederick, George's elder brother, and Robert Carlyle plays Ogilvy, an astronomer. THE WAR OF THE WORLDS tells their story as they face the escalating terror of an alien invasion, fighting for their lives against an enemy beyond their comprehension.


'FAHRENHEIT 451' TRAILER
MICHAEL B. JORDAN REMAKE
Meanwhile, HBO has released full trailer for their television movie FAHRENHEIT 451 which airs May 19th, starring Michael B. Jordan as Guy Montag, a fireman in a dystopian future society in which books are
banned and his job is to burn them. But he soon begins questioning the process and his mentor, Captain Beatty, played by Michael Shannon.