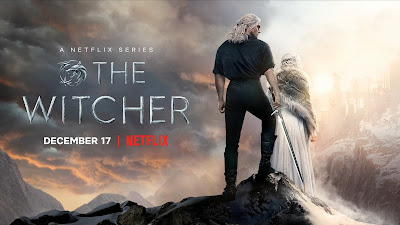 WITCHER SEASON 2 TRAILER
AND AIRING DATE ANNOUNCED
Witchercon has brought us the first trailer for season two of epic TV series THE WITCHER which will arrive to Netflix December 17th with six brand new episodes. We also got a new poster announcing the return of world's favourite epic saga. Burdened with covid outbreaks and cast injuries, the Witcher team has managed to finish the production in April.
Season two will follow Geralt of Rivia (Henry Cavill), convinced Yennefer’s life was lost at the Battle of Sodden, who seeks to bring Princess Cirilla (Freya Allan) to the safest place he knows, his childhood home of Kaer Morhen. While the Continent’s kings, elves, humans and demons strive for supremacy outside its walls, he must protect the girl from something far more dangerous: the mysterious power she possesses inside.
BRAND NEW CAST MEMBERS
The adventures of Geralt, a monster hunter, based on the super popular novels by Polish writer Andrzej Sapkowski, will have some new cast additions in the second season: Adjoa Andoh, Cassie Clare, Liz Carr, Graham McTavish, Kevin Doyle, Simon Callow and Chris Fulton are new names in the cast. Joey Batey as minstrel Jaskier and MyAnna Burning as high witch Tissaia are back again from the first season.
MOONHAVEN SF SERIES
CASTS DOMINIC MONAGHAN
We're sf all the way today, continuing with news coming from AMC who are making a MOONHAVEN sf series and have cast Dominic Monaghan as lead. The story follows Bella Sway, a lunar cargo pilot and smuggler 100 years in the future who finds herself accused of a crime and marooned on Moon haven, a utopian community set on a 500 square mile Garden of Eden built on the Moon to find solutions to the problems that will soon end civilization on Mother Earth. A skeptic in Paradise, Bella is sucked into a conspiracy to gain control of the artificial intelligence responsible for Moonhaven’s miracles and teams with a local detective to stop the forces that want to destroy Earth’s last hope before they are destroyed themselves. Monaghan will be Paul Serno, a detective on the Moon in a utopian community tasked with solving the problems of Earth.
WHEEL OF TIME EPIC SERIES
FIRST LOOK AT THE HEROES
Next Friday is bringing us the start of a new Comic Con and one of the exciting things presented there will be Amazon Prime's epic TV adaptation of famous saga WHEEL OF TIME which might mean we will get photos, posters or maybe even a trailer? Set in a high fantasy world where magic exists, but only some can access it, the eight episode saga follows a woman named Moiraine who embarks on a dangerous, world-spanning journey with five young men and women.
FIRST CHARACTER TEASERS!
A few days ago Amazon has released a logo for the series and two teasers which, although extremely short, show two characters from it: Rosamund Pike's Moiraine Damodred and Daniel Henney's al’Lan Mandragoran! The series follows Rand al'Thor (Josha Stradowski), who leads a small and humble life in a small town called the Two Rivers. There is danger lurking, however, in the potential attacks from the Dark One, an evil entity that wants to destroy everything. A sorceress by the name of Moiraine (Rosamund
Pike) takes Rand and his friends away from their home, as she believes one of them might be the reincarnation of the Dragon, an ancient hero who is prophesized to either save or destroy the world.
Posted by DEZMOND at 1:00 PM