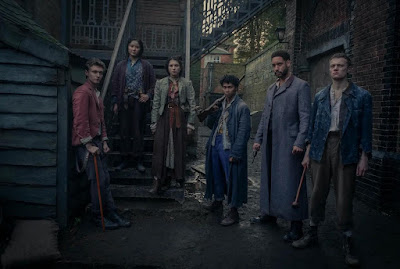 THE IRREGULARS TEASER
NEW SHERLOCK HOLMES SERIES
Here to launch your new week is the first and rather cheap and unimaginative teaser for eight episode period set series THE IRREGULARS which will stream on Netflix from March 26th as a creepy (the original poster is actually so bizarre and sick that I decided not to promote it here at the spy's so I'm giving you the second one which isn't much better but at least it is not scandalous and evil) new version of Sherlock Holmes whom we don't see in the teaser, but we do have first photos showing the rest of the cast, namely a gang of Victorian street teens who are manipulated into solving a series of crimes for the sinister Doctor Watson (who is now, of course, blackwashed and played by Royce Pierreson) and his mysterious business partner, Sherlock Holmes (Henry Lloyd Hughes).
THE IRREGULARS ARE SET IN
Victorian London, and they follow a gang of troubled street teens who are manipulated into solving crimes for the sinister Doctor Watson and his mysterious business partner, the elusive Sherlock Holmes. As the crimes take on a horrifying supernatural edge and a dark power emerges, it'll be up to the Irregulars to come together to save not only London but the entire world.
WHO IS IN THE GANG?
The cast also includes Thaddea Graham as Bea, Darci Shaw as Jessie, Jojo Marcari as Billy,  Mckell David as Spike and  Harrison Osterfield in the lead role of Leopold the leader of the Irregulars, with Clarke Peters as The Linen Man. Aidan McArdle is famous Arthur Conan Doyle's character, Inspector Lestrade.
Posted by DEZMOND at 1:00 PM