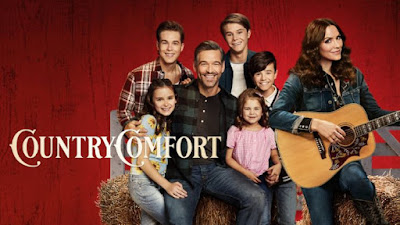 COUNTRY COMFORT PHOTOS
FROM NEW NETFLIX SITCOM
Most of the sitcoms, from Last Man Standing and Call Me Kat to Neighborhood and Bob Hearts Abishola, will have shortened seasons due to all the unexpected twists and turns in the covid pandemics, which means that the rest of the season does not look too bright when it comes to the comedy genre. What will make us laugh on a weekly basis once these sitcoms end their episodes? New Kevin James sitcom? I wouldn't watch that even if you pay me after what he did to Erinn Hayes. Well, Netflix is coming to the rescue with a brand new multi camera sitcom COUNTRY COMFORT which will start streaming March 19th starring Katharine McPhee (who is currently expecting her first child herself) as a nanny that Eddie Cibrian hires to look after his musically talented kids. 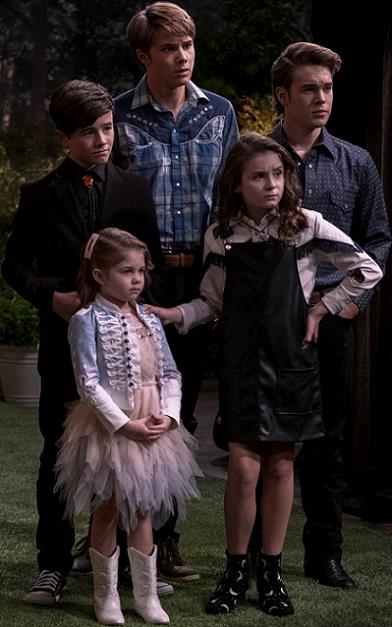 THE STORY OF COUNTRY COMFORT
When her career and personal life get derailed, an aspiring young country singer named Bailey (Katharine McPhee) takes a job as a nanny for a rugged cowboy named Beau (Eddie Cibrian) and his five children. With a never-give up attitude and loads of Southern charm, this newbie-nanny is able to navigate the family dynamics and be the mother figure they’ve been missing. To her surprise, Bailey also gets the band she’s been missing in this musically talented family who help get her back on the road to stardom! Ricardo Hurtado, Shiloh Verrico, Jamie Martin Mann, Griffin McIntyre, Pyper Braun, Janet Varney and Eric Balfour also star in the new comedy series.
HAPPILY MOVIE TRAILER
JOEL MCHALE'S KILLER ROMANTIC
Speaking of comedy, check out the first trailer for a mix of crime, comedy and romance in HAPPILY movie which arrives March 19th starring Joel McHale and Kerry Bishe. In this dark romantic comedy from Ben David Grabinski, they play Tom and Janet who have been happily married for years. But a visit from a mysterious stranger leads to a dead body, a lot of questions, and a tense couples' trip with friends who may not actually be friends at all. Watch the first trailer below and tell us what you think? Yes or what a mess? Oh, and there's Joel wonderfully shirtless in one of the scenes.
Posted by DEZMOND at 1:00 PM