WE HUNT THE FLAME
TO BECOME A TV SERIES
We're bringing news for the younglings today, starting with STXtv who have bought rights on Hafsah Faizal's fantasy adventure novel WE HUNT THE FLAME and will turn it into a television series. Published in 2019, the novel, as Deadline writes, has the story set in a fantasy world inspired by ancient Arabia. The fantasy novel follows a female hunter and an assassin prince who are put on a collision course full of adventure, darkness and romance as they find themselves on opposing quests to return magic to their kingdom. The sequel book We Free The Stars was published last month and she already has a new saga A Tempest of Tea set over at MacMillan.
LUCK ANIMATED ADVENTURE
FIRST PHOTOS FROM APPLE+
Over at Apple + Television, they've just released first photos from their new animated adventure movie LUCK which they are producing together with Skydance Animation. Also in their coproduction is another animated movie Spellbound, and both were previously meant to have theatrical release 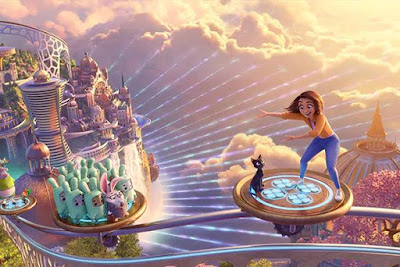 in 2022. LUCK, helmed by Peggy Holmes, revolves around an unlucky girl who, after stumbling upon the never-before-seen world of good and bad luck, must join together with magical creatures to uncover a force more powerful than even luck itself.  Jane Fonda will lend her voice in it to a Dragon, the exuberant CEO of Good Luck and undisputed luckiest ancient being in all the land. Her character is elegant, stylish and as persuasive as she is powerful. The only thing better than good luck is more good luck, so when bad luck starts to spin out of control, she must face her fears or risk losing good luck forever. SPELLBOUND is, meanwhile, an animated musical with an original score from Alan Menken and lyrics by Glenn Slater and it centres on a young girl who sets out to break the spell that has divided her kingdom in two. It will be directed by Vicky Jenson!
Posted by DEZMOND at 1:00 PM