TO OLIVIA MOVIE TRAILER
STARRING HUGH BONNEVILLE AND KEELEY HAWES
Sky has released the trailer for their movie biopic which will air on Sky Cinema and also in theatres this February TO OLIVIA (formerly known as An Unquiet Life) based on a true story and starring Hugh Bonne- ville asRoald Dahl and Keeley Hawes as his wife, famous Hollywood actress andOscar winner Patricia Neal. Inspiring and heart-warming, TO OLIVIA features an all British cast which also includes Sam Heughan (as Paul Newman), Geoffrey Palmer and Conleth Hill, with John Hay (Lost Christmas, There’s Only One Jimmy Grimble) as the director. Check out the trailer below the post. 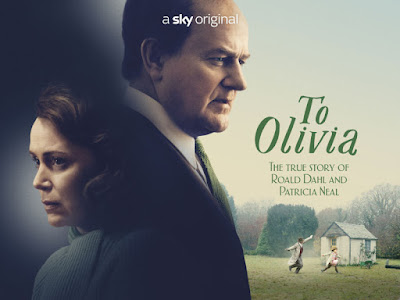 HEARTACHE OF FAMILY TRAGEDY
It’s 1962 and Roald Dahl, an eccentric, burgeoning children’s author and his wife, Patricia Neal, a glamourous Hollywood movie star, have retreated to the English countryside to bring up their expanding young family. Tragically, their lives are turned upside down by the devastating death of their daughter Olivia (whom they lost to measles when she was seven just a week after she contracted the disease) and as the couple struggle through the unimaginable loss, their shared grief becomes a source of redemption and strength which changes their lives forever.
Life Filled With Tragedies
His books enchanted many generations of children,  but Dahl's private life was one punctuated by tragedy after his and Patricia's daughter Olivia died at the age of seven in 1962. Six years after that he will dedicate Fantastic Mr. Fox to Olivia. Back in New York, they also survived a horrific accident in which their four-month-old son Theo was struck by a taxi, while in his pram, sustaining brain damages. When Patricia was pregnant with their fifth child, Lucy, she suffered a stroke which left her partially paralysed and blind and unable to speak. Dahl then imposed a grueling recovery regime on his wifethat has since largely been adopted as the standard therapy for all stroke victims. To surprise of everyone, she returned to work later on and won another Oscar nomination.
Posted by DEZMOND at 1:00 PM