'A SUITABLE BOY' TRAILER
FOR NEW BBC'S INDIA SET SERIES
Although it was expected this spring or at the end of the year, BBC has decided to launch their all Indian period set series A SUITABLE BOY this month July 26th (there might be a clash with ITV's Singapore Grip on Sunday
nights). You can check out the trailer for the six episode small screen adaptation of Vikram Seth's novel directed by Mira Nair and written by War and Peace and Les Miserables scribe Andrew Davies. 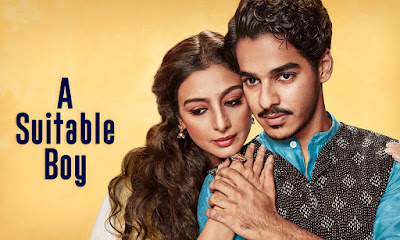 A Suitable Boy Tells The Story
of spirited university student Lata (Tanya Maniktala); coming of age in North India in 1951 at the same time as the country is carving out its own identity as an independent nation and is about to go to the polls for its first
democratic general election. Lata’s mother is determined to find her a husband – a suitable boy – but Lata, torn between family duty and
the excitement of romance, embarks on her own, epic journey of love and self-discovery. Connected to Lata through their siblings’ marriage, the wayward
Maan (Ishaan Khatter) is determined to enjoy life to the full whatever the consequences, much to the concern of his politician father. But could his infatuation with beautiful courtesan Saaeda Bai (Tabu) be one step too far?
Their stories play out during a tumultuous period for India and reflect the wider conflict between tradition and modernity at the time, as the election looms and the country decides its destiny.