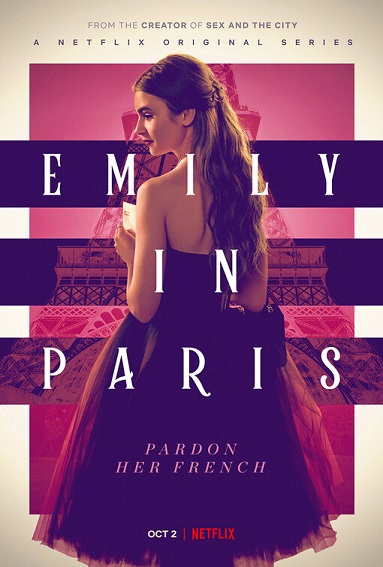 'EMILY IN PARIS' WITH
LILY COLLINS NABBED BY NETFLIX
Trying to stack on already finished programmes ready for airing this Autumn, Netflix has bought EMILY IN PARIS series from Paramount Network. The ten episode romantic comedy series created by
Darren Star, sees Lily Collins playing Emily, an ambitious twenty-something marketing executive from Chicago, who unexpectedly lands her
dream job in Paris when her company acquires a French luxury marketing company — and she is tasked with revamping their social media strategy.
Emily’s new life in Paris is filled with intoxicating adventures and surprising challenges as she juggles winning over her work colleagues, making friends, and navigating new romances. Lucas Bravo and Kate Walsh also star. The
series shot entirely in Paris, will have Sex and the City's Patricia Field as the costume designer, and as you can see from the photos, she has turned Emily into a chic fashion icon, a new Carrie Bradshaw.

'DECEIVED' TRAILER
FOR CHANNEL 5'S NEW THRILLER
After Penance mini series, which was, admittedly, rather good, British Channel 5 is bringing us another thriller series this year. THE DECEIVED
will follow follows Ophelia (Emily Reid), a student who has an affair with her hot professor Dr Michael Callaghan (Emmett J. Scanlan). After Michael's
wife Roisin (Catherine Walker) dies in a house fire, Ophelia begins to suspect that she may actually be alive. Aided by her confidante and local
builder McKeough (Paul Mescal), a possibly pregnant Ophelia tries to figure out what is really going on, while also trying to maintain her sanity. The series starts August 3rd, Monday!
Posted by DEZMOND at 1:30 PM