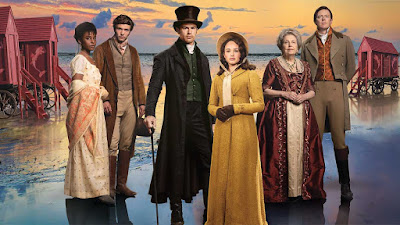 'SANDITON' EPIC TV DRAMA
WELCOME TO REGENCY ERA!
Poldark is finally ending forever, spylings, tonight and tomorrow night (which is probably for the best given how embarrassingly atrocious the final season has been), so what are we going to watch now when it comes to period
set dramas? Well, SANDITON of course, which starts tonight at ITV clashing in the prime time spot with Captain Ross and his constantly nagging wife. SANDITON is, as I informed you  before, the small screen adaptation of
Jane Austen's last book, and it will also air sometime later this year at PBS for the American audience. The cast includes Rose Williams, Theo James, Anne Reid, Kris Marshall, Kate Ashfield, Jack Fox, Adrian Rawlins, Turlough Convery, Mark Stanley, Matthew Needham, Alexandra Roach, Leo
Suter, Kevin Eldon and Adrian Scarborough! Andrew Davies, who brought us Les Miserables and War and Peace, is in charge of the adaptation! The series will also feature Austen's only black character (a rich heiress whom all
the gents want to seduce in Sanditon) and it will also feature lots of male nudity (and not from the hunks in it, but naked bums from all the unexpected members of the male cast LOL). They are apparently trying to make good old
boring Austen raunchy out of a sudden. But I'm sure there will be other offensive liberal agenda stuck within a fully nonliberal era just for the sake (or joke) of it. Austen herself has finished only 11 chapters of the novel before she died in 1817.

THE STORY OF SANDITON
follows the impulsive, spirited and unconventional Charlotte Heywood (Rose Williams) and her spiky relationship with the charming Sidney Parker (Theo James). When a chance accident transports her from her rural
hometown of Willingden to a would-be coastal resort, it exposes Charlotte to the intrigues and dalliances of a seaside town on the make. The drama takes
viewers from the West Indies to the rotting alleys of London and exposes the hidden agendas of each character and sees Charlotte discover herself and ultimately find love.


THE INHABITANTS OF SANDITON!
In the eight part drama, Anne Reid will play Lady Denham. Two husbands dead and gone, Lady Denham received money from the first and a title from the second and expects to be treated with a great deal of deference.
Notoriously tight-fisted, she seems to delight in the power that she wields over the town, particularly those waiting to cash in from her death. Playing the head of the Parker family, Kris Marshall stars in the eight part series as Tom
Parker, an enthusiastic and happily married man with a vision of putting Sanditon on the map. Jack Fox is Lady Denham's nephew, villainous Sir Edward Denham, while Charlotte Spencer plays his sister Ester.
Posted by DEZMOND at 1:30 PM