'CLEANING UP' TRAILER
STARRING SHERIDAN SMITH AND MATTHEW MCNULTY
Info from the British Isles today. ITV is ready to start airing its six part drama CLEANING UP from January 9th. It stars Matthew McNulty and 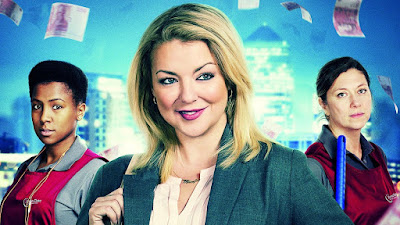 CLEANING UP FOLLOWS
Office cleaner Sam, one of an invisible army who work every night in the gleaming buildings of London’s financial centre. She dreams of a better life but struggling with an online gambling addiction and spiralling debts, Sam is
going under. Until one night, hidden in plain sight, she overhears an illegal trade being made. This lucrative stock market information, if used correctly,
could be the break she desperately needs. ﻿Armed with a copy of ‘Trading for Dummies’ and her gambler’s nerve – Sam has everything and nothing to lose – but how far is she willing to go to turn her fortunes around?


'YEARS AND YEARS'
1ST PHOTO OF EMMA THOMPSON FROM NEW BBC SERIES
Rival BBC has issued the first photo from their new contemporary fantasy series YEARS AND YEARS  in which Emma Thompson plays an
outspoken celebrity turned political figure whose controversial opinions divide the nation! She’s a new breed of politician, an entertainer, a rebel, a trickster,
and her rise to power leads us into an unknown future. Our dearest British super hunk Russell Tovey plays her son!