'FAM' SITCOM
WITH TONE BELL & NINA DOBREV
The year behind us was really good for some of the multicamera sitcoms (Neighbourhood at CBS ruled Monday nights and Big Bang Theory Thursdays, Last Man Standing dominated Friday nights for Fox with its glorious, record breaking return together with his sister sitcom Cool Kids) and really bad for some others (the audience does not appreciate backstabbing and thus Conners at ABC did not manage to reach the heights of legendary Roseanne, while Happy Together did not impress at CBS). The biggest and the most embarrassing flop was definitely the return of Murphy Brown after almost thirty years, but the audience did not like its hateful and

critical tone, so it is getting replaced on Thursday nights at CBS by warm new family sitcom FAM from January 10th! It can be expected that Murphy Brown and Happy Together won't be getting second seasons.


NEW MULTICAM SITCOM FAM
stars Nina Dobrev and  our beloved Tone Bell as a young woman and her adoring fiancé whose vision of a perfect life with his wonderful family is radically altered when her 16 year old, out of control half sister unexpectedly
comes to live with her. Clem’s upbringing and teen years left a lot to be desired, but she pulled herself up, and built a fantastic life — great job, terrific apartment, and an amazing fiancé, Nick, a college professor from a well-to-do "normal" family. Nick's warm and supportive parents, Rose (Sheryl Lee 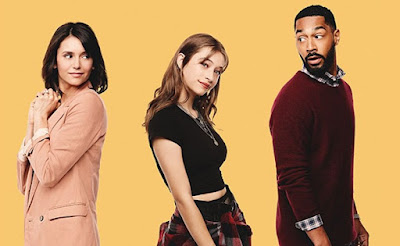 Ralph) and Walt (Brian Stokes Mitchell), embrace Clem and complete the family she always wanted. But when Clem’s wild child half sister, Shannon (Odessa Adlon), appears on their doorstep to escape their train wreck of a
dad (Gary Cole), Nick agrees that Clem can help her avoid all the mistakes she made, and they invite her to move in. As the family Clem chose and the family she has blend, Clem realizes that this happy fam may be the perfection she's been seeking.