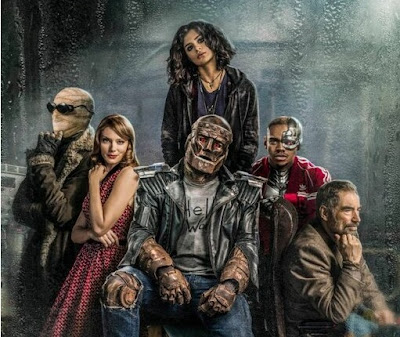 'DOOM PATROL' DC SERIES
THE OUTCAST SUPERHEROES!
Now, you know that your spy usually does not do any superheroes, but this one does have a rather promising cast! DOOM PATROL, based on a DC comic, will hit new streaming service DC Universe from February 15th starring Brendan Fraser, Matt Bomer and Timothy Dalton. The new team of super heroes was first announced in DC's other series Titans. It will follow the adventures of an idealistic mad scientist and his field team of super powered outcasts. Fraser and Bomer will play the characters only in flashbacks, while Matthew Zyk and Riley Shanahan will play the heroes under their costumes.

DOOM PATROL IS
A re-imagining of one of DC's most beloved group of outcast Super Heroes: Robotman, Negative Man, Elasti-Girl and Crazy Jane, led by modern day mad scientist Dr. Niles Caulder (The Chief). The DOOM PATROL's members each suffered horrible accidents that gave them superhuman abilities - but also left them scarred and disfigured. Traumatized and downtrodden, the team found purpose through The Chief, who brought them together to investigate the weirdest phenomena in
existence - and to protect Earth from what they find. Part support group, part Super Hero team, the DOOM PATROL is a band of super powered freaks who fight for a world that wants nothing to do with them. Picking up after the events of Titans, DOOM PATROL will find these reluctant heroes in a place they never expected to be, called to action by none other than Cyborg, who comes to them with a mission hard to refuse, but with a warning that is hard to ignore: their lives will never be same.


WHO IS IN THE PATROL?
The cast is led by Timothy Dalton as Dr. Niles Caulder or The Chief. Matt Bomer stars as Larry Trainor or Negative Man: former pilot, who crashed into negative energy and is now wrapped in bandages from head to toe. Brendan Fraser is Cliff Steele or Robotman: former car racer whose brain was transplanted into a robotic body after an accident destroyed his own. Joivan Wade is Victor Stone or Cyborg:  a half human, half machine superhero, struggling with his duality. April Bowlby portrays
Elasti Woman: former actress, who developed the power to stretch, shrink and grow after being exposed to a toxic gas. Diane Guerrero is Crazy Jane who has 64 distinct personalities, each displaying a different super power!