'MURPHY BROWN' TRAILER
MURPHY'S CREW IS BACK!
Continuing our presentation of new multicam sitcoms coming to the small screens this Autumn, today you can check out new photos and trailer for the return of MURPHY BROWN which comes back to CBS September 27th with new episodes decades after the original series was ended! 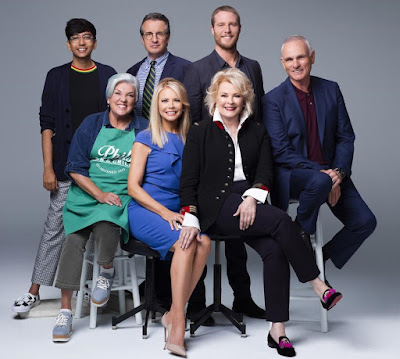 MURPHY HAS A SON!
The revival of the ground-breaking comedy about the eponymous broadcast news legend and her biting take on current events, now in a world of 24-hour cable, social media, and a vastly different political climate will see Candice
Bergen taking the lead which made her famous. Amid a divided nation and chaotic national discourse Murphy decides to return to the airwaves and recruits her FYI team: lifestyle reporter Corky Sherwood (Faith Ford), investigative journalist Frank Fontana (Joe Regalbuto), and her former
wunderkind news producer Miles Silverberg (Grant Shaud). Joining them is social media director Pat Patel, who is tasked with bringing Murphy and the team into the 21st century. Murphy's millennial son, Avery (Jake McDorman), shares his mother's competitive spirit and quick wit, and is
following in her journalistic footsteps — perhaps too closely. The team still lets off steam at Phil's Bar, now run by his sister, Phyllis. Now back in the game, Murphy is determined to draw the line between good television and honest reporting, proving that the world needs Murphy Brown now more than ever.


'LAST MAN STANDING' TRAILER
I THINK I'VE SEEN A FOX!
Another beloved classic that returns victorious to TV after a year and a half long political exile from ABC, LAST MAN STANDING has a rather
delightful teaser announcing its move to Fox where it will start airing its brand new seventh season September 28th, Friday! Tim Allen returns as Mike Baxter, a sole man in the house with a wife and three daughters.  Beside Allen and Nancy Travis as his wife, most of the old cast returns from Amanda Fuller, Christoph Sanders, Jordan Masterson, Jonathan Adams, to Hector Elizondo. There are news that Molly Ephraim and Flynn Morrison, who played Mandy and Boyd, will not be returning. But I also heard that Eve, who has gone to air force academy, will be back but only as occasional guest star. Mandy will be
recast. Which means that Mike has married off two of his daughters and sent the youngest to college, so he can now enjoy his wife alone in the house in their empty nest :) The Baxters will be joined, though, by a foreign exchange student from China!