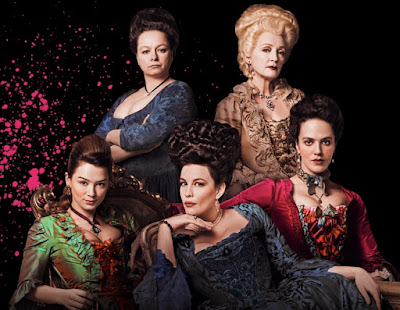 Hulu has officially ordered the third season of Harlots on September 24th!

'HARLOTS' SEASON 2
CHARACTER PHOTOS ARE IN!
Sorry, people, for not posting this spotlight in our usual Sunday primetime slot, but the spy's headquarters were experiencing some technical trouble yesterday! We are back with the full swing today with premium spotlight on the second season of Hulu's popular 18th century series HARLOTS which arrives Wednesday, July 11th with eight brand new episodes following the hard lives of Covent Garden prostitutes who entertain, threaten and sometimes even kill their rich customers in Georgian London. Today you can enjoy the character photos for the second season with our beloved harlots in silk and brocade!

will again follow the Wells family, led by matriarch Margaret (Samantha Morton). When her daughter Charlotte (Jessica Brown Findlay) places
herself in the brothel of arch-rival bawd Lydia Quigley (Lesley Manville) in order to secretly help her mother by digging up her enemy's secrets, their toxic
and deep-set rivalry is taken to a dangerous new level. Meanwhile, alluring and wealthy socialite Lady Fitz (Liv Tyler) is drawn by Charlotte into the plot
against Lydia, as well. As you can see from the trailer some characters will be lost forever, some new will arrive as well!
OTHER SEASON 2 TITBITS!
Season two fill also see the downfall of Margaret's long time friend, fellow bawd Nancy, the tomboy who wears pirate clothes, while Charlotte will see her
loyalties gravely tested. Margaret's younger daughter Lucy will fall under Lord Fallon's spells. In the end Margaret will have to save both of her daughters
from disaster! The series hails from the creative team of Moira Buffini, Alison Newman, Alison Owen, Debra Hayward and Alison Carpenter, with Coky Giedroyc returning as lead director and Grainne Marmion producing.