'CLIFFS OF FREEDOM' POSTER
WITH CHRISTOPHER PLUMMER
Still a deep slumber over in Tinseltown, so we are going international as usual, and I know you like it when your trusted spy brings you worldwide pleasures! First treat, a poster for historical drama CLIFFS OF FREEDOM set at the beginning of the 19th century, in the years which were very tumultuous for the Balkan Peninsula. With an international cast lead by acting legend Christopher Plummer the movie will also star Lance Henriksen, Billy Zane, Raza Jaffrey, Patti
LuPone, Costas Mandylor. It will be a sweeping love story set during the dawn of the Greek War for Independence against the tyrannical Ottoman Empire in the 1820s.


'BIG BAD FOX' LENDS
VOICES FROM CELIA IMRIE AND MATTHEW GOODE!
Great cast has also been gathered for the English version of French animated feature BIG BAD FOX! Our dearest Celia Imrie and Matthew Goode will
lend their voices to the story of an unusual farm which is home to a fox who mothers a family of chicks, a rabbit who plays a stork, and a duck who wants to replace Father Christmas. 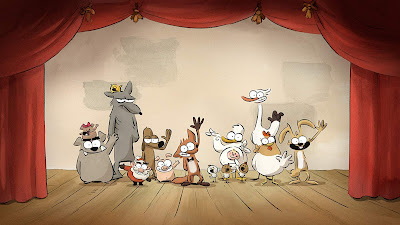 FIRST RAFE SPALL
PHOTO FROM 'DENMARK' COMEDY
There is also the first photo from Rafe Spall's  bittersweet comedy DENMARK about one man's pursuit of a dream no more ridiculous than the times we live in! He plays a down-on-his-luck Welshman without a job or
access to hot water, who makes a decision to change his life for the better. With nothing to lose, and everything to gain, he travels across Europe with one crazy goal: to get himself arrested and sent to a Danish prison where the beds are warm and the water is hot.
Posted by DEZMOND at 1:30 PM