FIRST DEV PATEL PHOTOS
FROM 'THE PERSONAL HISTORY OF DAVID COPPERFIELD' MOVIE
ADAPTATION
Period set delights for you today, beginning with photos arriving from the sets of Armando Iannucci's big screen version of THE PERSONAL HISTORY OF DAVID COPPERFIELD based on Charles Dickens’ semi autobiographical chronicle of the life of the iconic title character!  They show Dev Patel who takes the role of the titular hero. The story follows Copperfield in the 1840's as he navigates a chaotic world to find his elusive place within it. From his unhappy childhood to the discovery of his gift as a storyteller and writer, all the while on a journey full of life, colour and humanity. Dickens actually modelled the character after himself. You can also see Aneurin Barnard in the photos,
who is in the cast next to Tilda Swinton, Hugh Laurie, Ben Whishaw, Morfydd Clark, Anthony Welsh and Rosalind Eleazar! 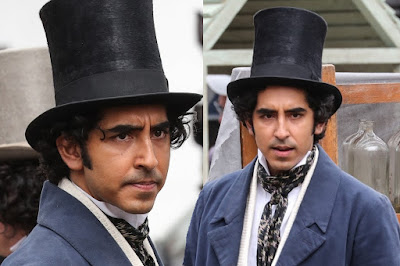