SKY'S EPIC TV DRAMAS
JAMESTOWN RETURNS FEBRUARY
In honour of the start of a new year, British Sky is treating us with two epic dramas! They've just announced today that the 2nd season of their popular historical series JAMESTOWN will start airing Friday, February 9th! You
can read more about the saga that follows first settlers in the 17th century America in our spotlight and the spy will bring u new photos as soon as they arrive! 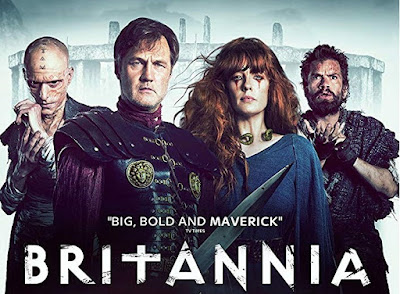 'BRITANNIA' AIRS TOMORROW
Their other historical drama BRITANNIA starts tomorrow in UK and then Friday, January 26th on Amazon Prime worldwide!  It is set in 43AD as the Roman Imperial Army, determined and terrified in equal measure, returns to
crush the Celtic heart of Britannia, a mysterious land ruled by wild warrior women and powerful Druids who can channel the powerful forces of the
underworld. It also airs in Italy this month, and in Serbia, Spain and Scandinavia on HBO from Friday or next week (and in many other European countries as well).


BBC'S 'MRS. WILSON'
RUTH WILSON TO PLAY HER VERY OWN GRANDMOTHER
Meanwhile, their rival BBC is turning Alison Wilson memoirs into a three part period set mini television series MRS. WILSON which will see her very own granddaughter Ruth Wilson playing her. To be aired by Masterpiece in USA, it is set in 1940s, 1960s London and 1930s India, and follows Alison Wilson, who is happily married to her husband, a mystery writer. When he dies a woman shows up at her door, claiming that she too is Mrs. Wilson and was married to her husband. Turns out that other Mrs. Wilson wasn’t the only “other” Mrs. Wilson and in addition to learning about his multiple wives, Ruth Wilson’s grandmother learns her husband was also a spy!
Posted by DEZMOND at 1:30 PM