'JAMESTOWN'
2ND SEASON TRAILER IS HERE!
Just as we are waiting for their new epic show Britannia to start airing next week, British Sky has released a trailer for the second season of another of their historical dramas JAMESTOWN which was, as you probably know, our
favourite epic series last year (together with Medici Masters of Florence). The second season of the drama, which was a huge success for Sky last year, will start airing this February! 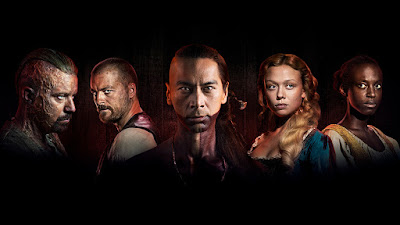 SKY'S JAMESTOWN
set in the early 17th Century, tells the story of three courageous, dynamic women who leave their dark pasts behind in England, and make the journey of
a lifetime across the ocean for a new life in America as the wives of the male colonists who have lived more than 10 years without women.The first season
showed them settling and finding their place bravely and courageously in the town ruled by men and hunger for gold and power. As you remember the final
scene had a shocker of black slaves being brought into JAMESTOWN and the second season will obviously deal with all the ghosts that were disturbed by it.


THE OLD CAST RETURNS
Naomi Battrick, Sophie Rundle and Niamh Walsh return as the female protagonists, our beloved boys Stuart Martin, Matt Stokoe and Gwilym
Lee return as their supporters and lovers (Gwilym just in the first episode as he dies and leaves Jocelyn fending on her own), with Jason Flemyng and Burn Gorman ruling the town again as governor and secretary. Ben Star
is back as everyone's fave doctor of the town! Abubakar Salim, Abiola Ogunbiyi and Rachel Colwell join the second season cast as the new
members! Carnival Films that also did Downton Abbey, Hollow Crown, Dracula, Last Kingdom and many others of our favourite historical dramas is also producing this one!