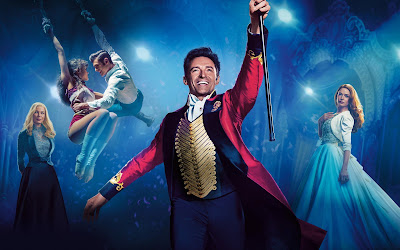 'THE GREATEST SHOWMAN'
ON EARTH IS HUGH JACKMAN!
In less than a month P. T. Barnum's circus is coming to your town! What do you mean you don't know who he is? He's THE GREATEST SHOWMAN
on Earth! Hugh Jackman's musical drama is arriving to theatres in North America on Christmas, December 25th and then in Europe and Asia from the rest of the month and well into January. Beside Hugh Jackman who plays the inventor of modern circus entertainment, the cast also includes Michelle Williams, Zac Efron and Rebecca Ferguson in the exciting movie directed by Michael Gracey who previously worked on visual effects in films. Before he was hired to helm the movie, it was supposed to be a straight biopic, but he suggested dance and music numbers to be put in it
turning it into a musical. The film took seven years in production because it is one of the first original musicals in many years and the studio deemed it too risky. Most other musical films included popular songs as well.


THE GREATEST SHOWMAN
a true life story inspired by the imagination of legendary P.T. Barnum,  is an original musical that celebrates the birth of show business and tells of a visionary who rose from nothing to create a mesmerizing spectacle that became a worldwide sensation in the 1800s. His
circus continued its work for more than a century with the last show held this May in USA. He gave work and opportunity to people who were often considered 'freaks' by the society and would have probably ended up as outcasts but P. T. Barnum gave them fame, money and a chance to travel the world and became famous. It is a bold and original musical that celebrates the birth of show business and the sense of wonder we feel when dreams come to life.


ORIGINAL MOVIE MUSICAL
Playing P. T. Barnum, Hugh Jackman not only stars but also sings in the film which feature seleven musical numbers with original songs from
Academy Award winners Benj Pasek and Justin Paul! When the first trailer was released earlier this summer many people were captivated by This Is Me song that was used in it. You can check it out below and you can also find it on the movie soundtrack which will come out before the film at the beginning of December. Michelle Williams, who plays P. T. Barnum's wife, and Zac Efron, who plays his young business partner, also sing in it. Rebecca Ferguson, who is herself Swedish and has graduated from music school, plays Swedish Opera singer Jenny Lind! This is Hugh's second musical after Les Miserables, but he was the original choice for legedary Moulin Rouge together with Catherine Zeta Jones before the roles went to Ewan McGregor and Nicole Kidman.