'PADDINGTON 2'
NEW CHARACTER POSTERS!
Your delight for this postfestive weekend are hilarious new character posters for family comedy movie PADDINGTON 2 a sequel to the 2014 hit movie which now boasts an exquisitely strong thespian cast with Hugh Bonneville, Hugh Grant, Imelda Staunton, Julie Walters, Brendan Gleeson, Sally Hawkins, Jim Broadbent and Ben Whishaw! It is already out this month in Europe, it will keep bowing around the world in December too and will hit American theatres in January 2018 the year which marks the 60th anniversary of the publication of the first Paddington book by Michael
Bond! The third movie has already been announced after this one scored a success even bigger than the first one at the British box office.

IN THE SEQUEL
Paddington is happily settled with the Brown family in Windsor Gardens, where he has become a popular member of the community, spreading joy and marmalade wherever he goes. While searching for the perfect present for his beloved Aunt Lucy's 100th birthday, Paddington spots a unique pop-up book in Mr. Gruber's antique shop, and embarks upon a series of odd jobs to buy it. But 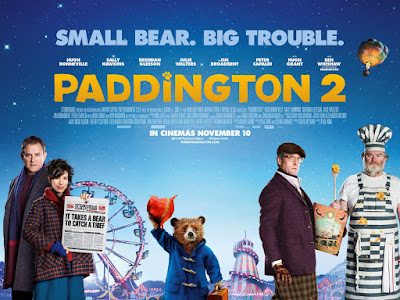 when the book is stolen, it's up to Paddington and the Browns to unmask the thief. In the first few weeks in UK cinemas the film has received stunningly high marks from the critics and the audiences! 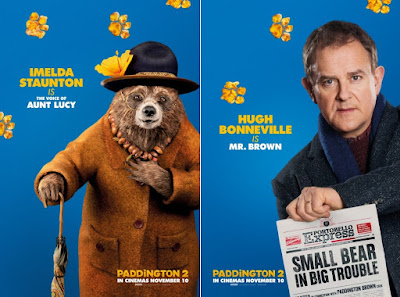 and Judy and Jonathan’s mother. Brendan Gleeson appears as Nuckles McGinty, a safecracker and prison cook, while Julie Walters is Mrs. Bird!

Jim Broadbent is Samuel Gruber, antique shop owner while Hugh Grant appears in the movie as Phoenix Buchanan, a faded and narcissistic actor who 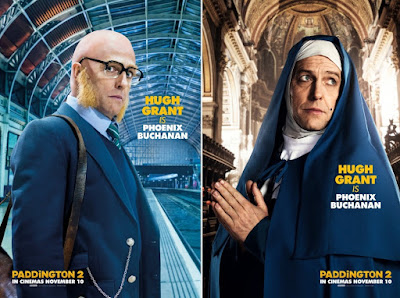 stars in dog food commercials and is the main antagonist with many disguises as you can see from the posters! Ben Whishaw lends his voice to Paddington 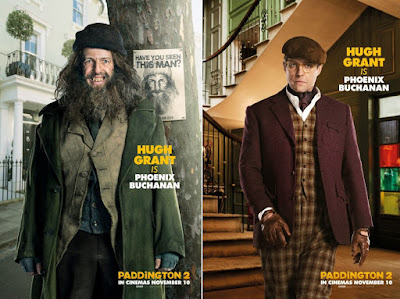 and Imelda Staunton to Paddington's aunt Lucy with Michael Gambon as his uncle. Joanna Lumley is also in the mindblowingly stellar cast!