'BAHUBALI II: THE CONCLUSION'
HAS BATTLE ELEPHANTS IN THE MAJESTIC TRAILER
As the glitzy highlight of our magnificent Epic Weekend we are ending our quest for epic delights today with a trip over to exotic India as I have two of their thrilling movie spectacles to show you, beginning with BAHUBALI II: THE CONCLUSION which already played in a lot of countries but it still doing its rounds in the cinemas around the world. You must check out the stunning, out of this world trailer below, it even has battle elephants in amazing fight scenes and whatnot.
THE HIGHEST EARNING INDIAN
FILM EVER
It is actually the most lucrative Indian movie ever worldwide, and it earned half of its $40 million budget just in North American cinemas when it played there earlier this spring. In the end it earned about four times more than it cost breaking many Indian cinematic records. The story of the epic adventure is taking place before and after the events of the first movie: When Shiva, the son of Bahubali (played by Prabhas), learns about his heritage, he begins to look for answers. His story is juxtaposed with past events that unfolded in the Mahishmati Kingdom.


'PADMAVATI' EPIC MOVIE
STUNNING TRAILER IS OUT!
I've already informed you about this one before, but now we have a mindblowing trailer as well filled with stunning action and dance scenes all set in the exotic regions of India: you can enjoy gorgeous posters and a trailer for opulent period set drama PADMAVATI which should hit Indian cinemas this December bringing 14th century extravaganza to the big screens, the story of Alauddin Khilji, the second ruler of the Khilji dynasty, and his obsessive love for the queen of 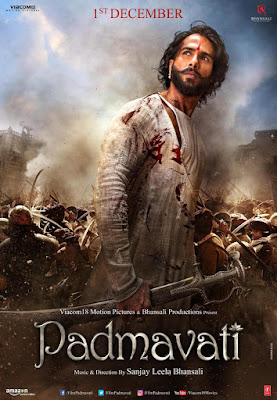 THE STORY OF THE EPIC MOVIE

Starring Deepika Padukone in the title role as Rani Padmini, alongside Ranveer Singh, Shahid Kapoor, and Aditi Rao Hydari, the film is a fictionalised account of the life of Rani Padmini, a legendary Hindu Rajput queen, mentioned in Padmavat. According to Padmavat, she was the wife of
Rana Rawal Ratan Singh, the Rajput ruler of Mewar. In 1303, Alauddin Khalji, the Turkic ruler of the Delhi Sultanate, laid siege to the Chittor Fort in
Rajputana. According to Padmavat, Khalji led the invasion motivated by his desire to capture Rani Padmini. Directed by Sanjay Leela Bhansali, the
movie was jointly produced by Bhansali and Viacom 18 Motion Pictures. Check out all of the lavish craziness in the storm of exotic delights in the trailer below:

it is a feast for the eyes

Both of these look great. Like Phil, I think Indian textiles are always so gorgeous. So vibrant and colorful!

sometimes I think it takes them about two days to get dressed up :)))

These posters are beyond amazing.

Cause you should always dress up when shooting someone... Angie will love it and, thank you, I'll be forced to watch it, too.