'HOWARDS END'
BBC & STARZ PERIOD SET DRAMA
Just three days before the start of the official airing, BBC One has finally released a trailer for their new period set drama HOWARDS END which starts airing this Sunday in four episodes, with Starz broadcasting the story of two couples caught in a swirling landscape of social and class divisions in turn of the century England sometime next year for the audience in USA.

THE STORY OF HOWARDS END
based on E.M. Forster's classic novel, focuses on Margaret Schlegel (Hayley Atwell), an intelligent, idealistic, bohemian young woman who is 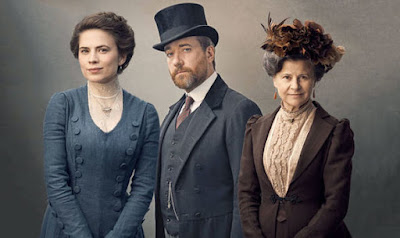 courted by the older Henry Wilcox (Matthew Macfadyen), a self-made conservative businessman, after his wife Ruth Wilcox (Julia Ormond) dies
unexpectedly! Meanwhile, Margaret’s passionate and capricious younger sister Helen Schlegel (Philippa Coulthard) takes up the cause of Leonard Bast
(Joseph Quinn), a young bank clerk who falls on hard times at work and at home with his partner Jacky (Rosalind Eleazar). In the absence of their
parents, who have died, the sisters’ loving but interfering Aunt Juley (Tracey Ullman) tries to keep the young ladies and their brother Tibby (Alex Lawther) on the straight and narrow.
WHAT DID THE SPY THINK?
The first episode is visually enchanting, story intriguing, performances mostly well done, but the series turns into a ghastly monotonous snobbish gibberish fest filled with shallow existentialist dialogues as early as the second episode and then finishes as an ode to blatant golddiggers with not an ounce of sense whatsoever.
Posted by DEZMOND at 1:30 PM